Hey Folks - it's time once again for Six Sentence Sunday and unlike my past posts I'm going to be bringing you six sizzling lines from my newest release, Conquering Jude. Just released yesterday this is the third book in my Doms of Chicago series from Excessica Publishing.   In this week's SSS, we have Olivia, the heroine and Domme of this story, trying to reassure Jude the hero that giving up control isn't the worse thing in the world - enjoy!  And don't forget to stop by and check out the rest of the SSS authors here

"Don‘t look so worried, pet - I treat those who belong to me with care. You have nothing to fear but fear itself once you put yourself into my keeping." She slowly eased his zipper down.

"I don‘t think FDR had this in mind when he said that." His feeble attempt at humor died in his throat when her hand delved inside his pants only to be blocked by his briefs.

"Nonetheless, I mean it." 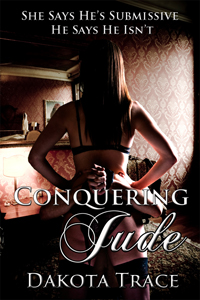