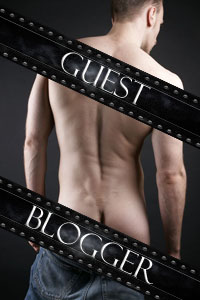 Today, I have the infinite pleasure of having one of my fellow Decadent Publishing and 1NS authors visiting. Her newest release (a bundle of her 1NS sci-fi books), An Alien to Love has just hit the stands and I'm super excited to share in her joy... so without further ado, here's Jessica and one of her top ten lists.  And don't forget to check out the contest at the end of the post. (I hear she's giving away a $25 gift certificate!)

TOP TEN PLACES TO GO ON A SCI-FI THEMED DATE

In writing 1Night Stand stories, it’s sometimes hard to come up with original places for dates to occur. Well, I came up with a list of places to go for sci-fi themed dates, and was inspired by many of them. Here’s my list...

3. A trip to Northern Ontario to see the Northern Lights

4. Spend the weekend at the Kakslauttanen Arctic Resort in Finland, another place to see the Northern Lights.

6. Visit the National Air and Space Museum in Washington D.C.

7. Visit the Canada Aviation and Space Museum in Ottawa, Canada 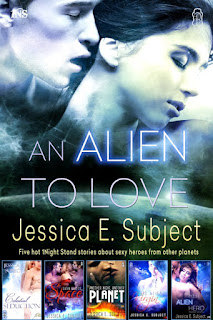 An Alien to Love


A collection of 1Night Stand stories


What do a librarian, a nurse, a director’s assistant, a housekeeper, and an orphan have in common? They all end up spending an evening with a gorgeous stranger. But, will one night lead to more, or will the women end up running away when they learn their sexy suitor comes from another planet? Find out in these five sensual 1Night Stand stories by sci-fi romance author, Jessica E. Subject.

Contains: Celestial Seduction, Satin Sheets in Space, Another Night, Another Planet, His Alien Virgin, and Her Alien Hero

Adult Excerpt from: Another Night, Another Planet

“A little of this and that. Transporting small packages between planets, mostly.” Cargo no one else wanted to carry. He grasped her hips, sliding her toward him, her robe slipping up her thighs. She grasped his shoulders and stared at him, eyes wide. But no objection came from her lips, so he continued. “As for why I’m here, well, I came to meet you. Right now, I don’t want to be anywhere else.”

Her cheeks flushed, and he could think of nothing but having his way with her. He leaned forward, tasting her sweet lips. She didn’t pull away, but wrapped her arms around him. Lining his tongue along the edge of her mouth, he deepened the kiss. He absorbed her essence into every cell. He couldn’t get enough. Reaching between their bodies, he undid the tie around his waist. Then hers. Delirious, he pulled the robes from between them until skin pressed against skin. Exactly as they were meant to be. Nibbling his way down her neck, he took pleasure in her soft whimpers. She leaned back, opening herself to him. For a moment, he could do nothing but stare at her luscious body, unable to believe she was there with him again.

He ran his tongue across her stomach, from her navel, all the way up to one of her rosy peaks, the taste of tropical fruits and her femininity overwhelming his senses. He sucked a nipple into his mouth, drawing his teeth over her tender skin. She cried out, but held him there rather than pushing him away. As he switched to savor her other breast, she began to rock over him. His semi-hard-on turned into a rock, seeking out a warm pussy. The head of his penis slid easily along her wet lips, but he refused to take the plunge. Way too soon.

Rising to his feet, he laid Ava across the lounger. “Stay here. I’ll be right back.”

He rushed over to the gourmet spread of food before his lust took over and he ruined the evening. Collecting a selection of pastries filled with creams and small chunks of juicy fruit, he took a deep breath, trying to stifle his aching cock. Anxious to satisfy another hunger, he carried the plate over to Ava.

He kneeled in front of her. A smile radiated across her face. “Thank you. I didn’t expect the eletin to affect me so much. It’s like the alcohol on Earth. I want you, don’t get me wrong, but….”

Setting a chunk of fruit between his teeth, he captured her lips again. Their tongues darted around the juicy flesh until he swallowed it down. He licked a trail of sweet nectar down her neck. Gods, he’d missed her.

Pinching one of the flaky pastries, he wiped its cream onto her pert, rosy nipples. Hunger and lust pulsed through him, but under it all, something more. More than want. He needed her. Always had. He refused to walk away from her again. Tonight was about more than pleasure, a one-night stand. Somehow, he had to convince her to never return to Earth, to stay with him. An impossible task. But he had to try.
Review for Another Night, Another Planet:


“…a fantastic representation of the [1Night Stand] series. Hot sex along with some interesting twists kept my interest from the first page.”
~ a TOP PICK at Night Owl Reviews

AND NOW FOR THE CONTEST!

To celebrate the release of AN ALIEN TO LOVE, and four years published, Jessica E. Subject is hosting a contest for a $25 e-gift certificate from Amazon.com or All Romance eBooks. Enter using the Rafflecopter widget placed below, or follow the link.

Please Note: Contest is international. No substitutions can be made. Must be 18 or over to enter. Void where prohibited by law. Good luck!