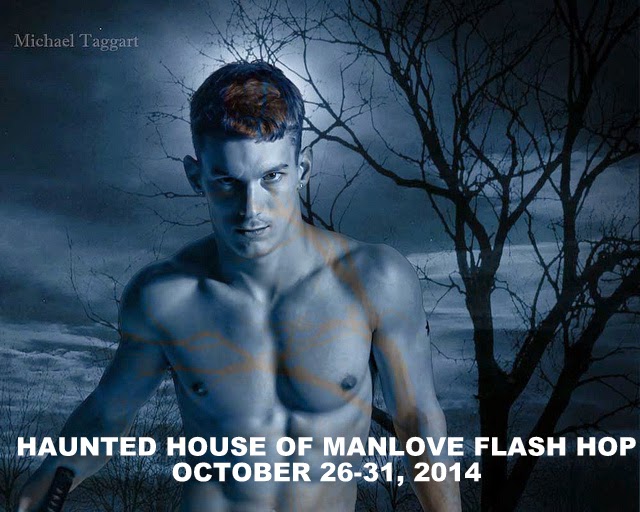 Once again it's time to celebrate with a House of Manlove's blog hop.  This time we're celebrating the fun time of All Hallow's Eve.  Or Halloween as my kiddos call it.  As an author who is scared to death of things that go bump in the night this was challenge for me. I don't do scary...so forgive me if my tale is frightening enough. Instead I wanted to give you a ghost story where redemption is the theme.  So read along as we find out of Kaden is strong enough to carry on without his lover, Eric, or if he's brave enough to take what Eric's ghost offers.

Oh and don't forget to check out the links at the end of the story.  It'll give you the schedule for the rest of the wonderful authors who will be celebrating all week long! 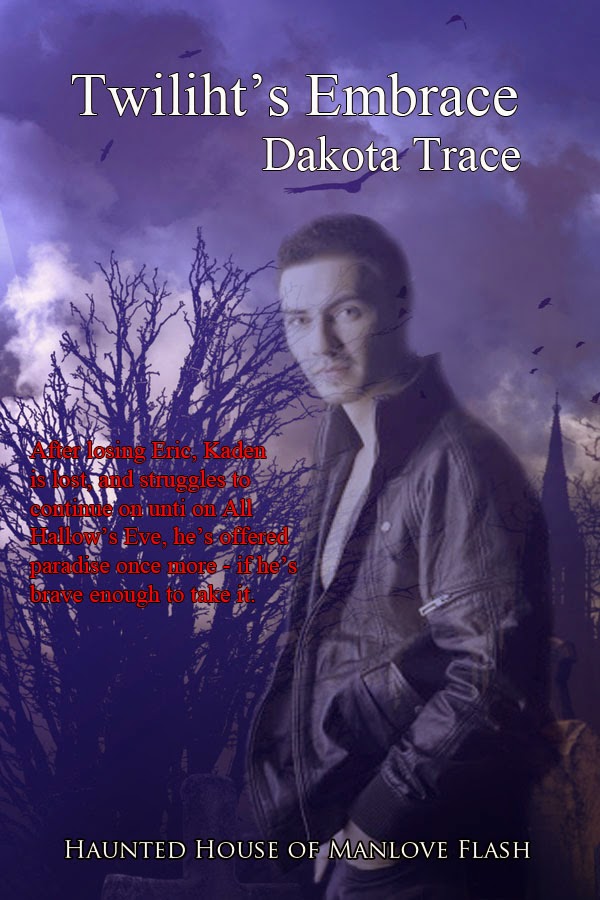 
Shivering against the rain, Kaden Shozavitz ignored the tingle of apprehension as he pushed open the door to the place he’d sworn never to return to– Bruceworth Manor. Soaked to the bone from his long walk up the graveled drive, after a tree crashed onto his car, he no longer cared he was seeking refuge in the home of his late lover, Eric Bruceworth the Third. It was shelter from the storm raging outside.

As he shut the door behind him, Kaden found it hard to believe it had been two years ago that he held Eric in his arms as his best friend and lover had drawn his last breath. The ravaging pancreatic cancer had eaten away at Eric, until he’d become a mere shell of the man Kaden had fallen in love with. But he’d stayed by his lover’s side ‘til the end as he’d promised.

“Don’t let me die alone in a hospital bed, tereso. Stay with me. Let your face be the last I see – your voice the last I hear – your arms the last I feel.”

Kaden had, even as the futility of the situation had torn him up. He’d remained at Eric’s side until the agonizing end. But once his lover had drawn his last breath, he’d gently closed Eric’s eyes, and sworn never to cross the threshold again.

“So why are you here?” His words echoed back at him as he stepped inside the foyer. “Because of that damned letter.”

The last thing he’d expected to receive a week before Halloween was a letter from Eric’s lawyer – a request from Eric – so the man claimed. The attorney said something about a ruling from the grave. But Kaden had been in a daze, understanding nothing after the “Eric requests your presence at Bruceworth on all Hallow’s Eve.”

Reaching out, he flicked on the light switch, sighing disgustedly when nothing happened. “Shit! At least he could’ve made sure the electricity was on.” After digging into his knapsack for his flashlight, he turned it on. The beam of light barely illuminated the cavernous foyer. Once it had been filled with life as Eric, an avid gardener, had kept his home over flowing with lush vegetation, but now it was a mockery of its former glory. The golden urns on either side of the door were empty, the sturdy oak table where he’d made love to Eric more than once was barren, and dust motes floated in the air.

He swung his bag back onto his shoulder. Shutting the door behind him, he drew a deep breath, stealing himself against the memories, and made his way down the hall toward his destination. His footsteps echoed as he crossed the marbled floor.

His palms were clammy as he turned the brass knob to Eric’s study. The silence inside the room sent shivers up his spine. Setting his bag down next to the desk, he sighed. The room was a little cleaner than foyer, but not by much. The pile of wood next to the massive fireplace told him that at least someone wanted to make sure he was comfortable despite the lack of electricity. Shrugging off his leather jacket, he draped it over the back of Erik’s massive chair.

“A fire is the first item on the agenda.”

Several hours later, Kaden awoke surrounded by warmth and a body pressed between him and the back of the couch. Sometime during the night, the fire had died down but embers still burnt in the hearth. He probably should get up, but instead relaxed deeper into the embrace, feeling a contentment he hadn’t felt since they’d found out about Eric’s cancer. His eyes drifted back shut, sleep beaconing once more.

“Always such a sleepy head, tereso. Especially when you’re in my arms…”

Kaden’s eyes flew open in surprise. Despite his sleep-fogged mind and slower than normal responses, he recognized the expensive scent of Eric’s Italian cologne, and the long length of the man cradling him in the curve of his body. He shifted onto his back, squinting in the near darkness. “Eric?”

“I’ve missed you.” A hand brushed over his cheek. “More than you can know.” The words were breathed against Kaden’s lips, as Eric leaned over him.

Familiar desire flooded Kaden’s system. His body recognized the masterful touch and the taste of his lover. He moaned softly and pressed closer. He didn’t care if this was a dream. He needed this. He thrust his tongue into Eric’s mouth and clutched at his shoulders. He whimpered when Eric tore his mouth away.

Eric’s familiar words settled like a red-hot poker in his groin. They’d always been followed by slow-but-demanding sex. Behind his constricting jeans, his cock wept with need.

Kaden’s blood froze and he glared up at Eric’s shadowy face. “Not ever again.” He tried to shove Eric away, but his lover pinned him with ease.

“Don’t you hush me! You’ve been haunting me for the past two years. I can’t answer the phone without expecting to hear your voice, look up from my desk and not expect to see you there. Hell, I can’t even sleep without you haunting my dreams.” He shoved at Eric’s chest as tears burned the back of his eyes. “Damnit! You weren’t supposed to die! You weren’t supposed to leave me.”

“What do you mean… choice?” Kaden narrowed his eyes.

“You can continue as you are, or have me for an eternity.” Eric rubbed his thumb over Kaden’s lower lip.

“But you’re dead.” Kaden’s mind whirled. “You want me to commit suicide?”

Eric gave a slow shake of his head. “No. You’ve been in an accident. Your protettore told me it might be my last chance with you. He shouldn’t have, since his job is to protect you, but if you keep travelling down the path you’re headed, you’ll die anyway. The drink will kill you.”

“What did you expect me to do?” Kaden tried to free himself again. “Just continue on like you hadn’t died?”

This time Eric released him. “I expected you to grieve, then live a full and happy life. It’s what you promised me.”

Kaden rolled off the couch. “I lied. There will never be another for me. Damn it. You loved me too well. No man can replace you.”

Eric pushed himself up on one arm, the blanket pooling around his waist. “Then spend the rest of the night in my embrace. But do so realizing your protettore will be unable to save you this time – you will leave everything behind. However, you will be mine for eternity.”

Could he leave his job behind that kept him sane after Eric’s passing? His family who loved him, but truly didn’t understand him? Staring down at Eric, Kaden realized there was no choice. “You.” The word came out hoarse. “I choose you.”

Contentment filled Kaden as he settled against Eric. He was home.