Sneak Peek: The Chocolate Made Me Do It!

As promised...here's a sneak peek of the first book in my Naughty Tibdits line.  It will becoming out July 15th....give or take a day..(depending upon loading time for the vendors.)  I hope you enjoy this revisiting Zephyrus and Annabelle as much as I did.


Opening Scene of Chapter One

Lush, dark, and moist…with just a hint of tartness. A guaranteed orgasm…of the mouth and beyond tempting. Annabelle Lorkin leaned closer, unable to resist its siren’s call, straining to get a mouth-watering whiff of its decadence. She shouldn’t be here – shouldn’t be giving into the lure of the best damned chocolate she’d ever tasted, but she couldn’t stop herself.

Even as she bull-shitted herself, she knew she’d end up taking at least half a dozen raspberry brownies home with her and screw her already larger than average waistline, that is if she gave into the unstoppable temptation. She had absolutely no will power when it came to a certain man’s decadent baking. She craved it worse than a drug addict needed his next hit.

“You know, if you get any closer to the case, Hestia is going to have to clean your nose prints off the glass?”

Jerking her head up, her cheeks warmed as she met Zephyrus Raincloud’s dark eyes – and nearly all thoughts of the tempting brownies in front of her fled. Tall, with broad shoulders that strained the seams of his white cotton shirt, and led down to what she was sure was an impressive six-pack, Zephyrus had starred in many of her sexual fantasies.

Along with that gorgeous hair.

More than once, she’d wondered what it would be like to free the long midnight hued strands and run her hands through them. How soft would it be? Would it tickle if he brushed it across her skin? Or would it feel like silk? Even as she longed to find out, she knew it would never happen. Men like Zephyrus didn’t go for a size eighteen – okay size twenty if she was being honest – girls. But that didn’t stop her from dreaming. They’re just fantasies, Anna. Remember that. Get your chocolate and leave. 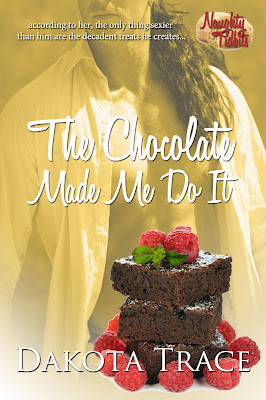 She sighed and backed up from the case.

“Annabelle?” Concern laced his tone. “I was just joking. You can drool all over the case if you want.”

She forced a laugh, slipping into the role of the average girl-next-door - the girl who was everyone’s friend but nobody’s lover. “I bet you say that to all your customers.”

He gave a slow shake of his head, his braid slipping over his shoulder to rest against his impossibly wide chest. She made herself ignore the need to tug on the dark length. “Not at all – only special customers are allowed that privilege.” Something hot flared in his gaze before he masked it. “So what will it be?”

“I really shouldn’t, but I’ll take…” She ignored the raspberry brownies and focused on the gold rimmed tray next to them. “A truffle, this time.”

Something I won’t devour in fifteen seconds. While every one of his truffles were truly amazing in flavor, each one was so rich and decadent they had to be nibbled on, not hastily consumed. Unlike the brownies.

“Are you sure?” Even the way he cocked his head seemed skeptical – as if he could read her mind and knew how much she wanted the brownies. “The way you were eyeing the brownies…”

“Positive. Today I’d really love to have one of your double chocolate truffles.”

“Okay…” He shrugged. “If that’s what you want.” Zephyrus opened the display case to pull out the tray. As he placed the variety of deliciously tempting morsels in front of her, his sister, Hestia, came out of the kitchen. While her brother was tall and buff, Hestia was significantly shorter and curvy with a ready smile on her face as she spotted Annabelle.

“Zephyr, you have a call on line one from Dante’s. Something about that imported cocoa you ordered. He’s having a hard time getting the amounts you requested.”

A scowl crossed his face. “Damn it.” Then as if suddenly realizing that he was in front of a customer, he gave her an apologetic smile. “Sorry, but I’m going to have to take this.” He turned to his sister. “Can you get Annabelle her truffle? And maybe convince her to take a brownie as well?” He gave Hestia’s shoulder a squeeze as he slipped past her. “I know she wants one.”

“No, I don’t!” Annabelle’s cheeks heated in embarrassment. “Besides I forget my wallet at the office and don’t-”

“Then it’s on the house.” He winked at her before pushing through the swinging door that led to the prep area. “For being such a loyal customer.”

Turning towards Annabelle, Hestia chuckled. “He caught you drooling on the case again, didn’t he?”

Picking up the tongs, Hestia selected a perfectly rounded truffle from the tray. “I don’t know why you do this.”

“Do what?” Annabelle’s gaze shifted back to the brownies in question.

“Fight your craving for Zephyrus’s brownies.” Hestia placed the chocolate in the small box before gesturing toward the case with the tongs. “It’s an impossible battle that I’ve lost a number of times since that boy learned how to bake. So from one brownie addict to another - if you want the brownie – have it!”

“But I shouldn’t – they go straight to my hips and…” Her willpower wavered as Hestia placed the truffle tray back in the case, then pulled out the tray holding the brownies.

“Nonsense. One won’t kill you.” She slipped a thick gooey brownie loaded with raspberries into the box next to the truffle. “Besides Zephyr’s the boss – and he said you’re to have a brownie.” She batted her eyelashes before placing the tray back in the display case. “Now you don’t want to get me in trouble with my brother, do you? He’ll tell our mother and she’ll nag me about listening to him. I’ll never get any peace and…”

“Awesome! One less evil goodie to tempt me tonight when I close up.” Hestia did a little victory dance behind the counter.

Annabelle shook her head. “You’re such a loon.”

Hestia stilled and gave her an affronted look, then ruined it by giggling. “Shhh, don’t tell anyone.”

©Dakota Trace All rights reserved. This is a work of fiction. All names, characters, locations, and incidents are products of the author’s imagination, or have been used fictionally. Any resemblance to actual persons living or dead, locales, or events is entirely coincidental. No portion of this work may be transmitted or reproduced in any form, or by any means, without permission in writing from the author.
Posted by Dakota Trace at 6:00 AM

Email ThisBlogThis!Share to TwitterShare to FacebookShare to Pinterest
Labels: excerpt, Naughty Tidbits, The Chocolate Made Me Do It. Sneak Peek