Over the weekend, I actually powered on my Kindle  Fire for the first time in nearly a year.  I know that seems sad, but honestly since I got my new smart phone I do 90% of my reading on it, instead of my bigger and heavier reader. It's smaller and is one less thing to cart around with me.  But as I was browsing through my library, I realized I had a ton of older books I hadn't read or only gotten part way through.  What? How did that happen?

But it got me to thinking about the older releases of some of my favorite authors. I actually sat down and reread one of the earlier books in Shelly Laurenston's Pride Series.  I'd forgotten how much I had enjoyed it.  It also made me wonder why some authors only seem to focus on newer releases (not that it's a bad thing - I love new releases as much as the next gal) but it's also fun to revisit old friends.   So this week I'm going to start featuring one of my older releases on Mondays.

For this first week, I'm going to feature, Blind Need, my first 1NS book from Decadent Publishing. Xaviera and Nate were both wounded souls that made me work for their story. I truly enjoyed revisiting them when I wrote Wyk's Surrender. So enjoy this excerpt from Blind Need. 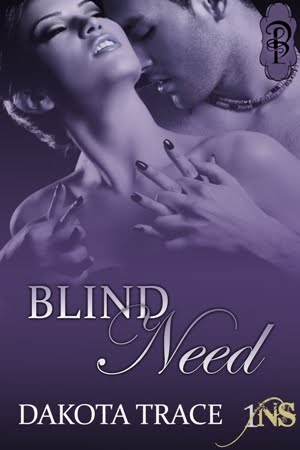 Two wounded souls, one blind and the other scarred, are matched up by the famous Madame Evangeline—neither one expecting more than a brief meeting of two bodies in the dark for one night.

Xaviera Navarro had it all, a wonderful career ahead of her running her family’s wine business, a sexy fiancé, and her dream-wedding around the corner, but that all changed in the blink of an eye. A freak accident has left the Navarro wine heiress blind with no future other than the company of her seeing-eye dog, Lucy. After licking her wounds, she finally is tired of her own company and ventures out in hopes of finding a man who might be strong enough to stand beside her but not in front of her. If she can’t have that, she’ll settle for a night of hot loving before returning home.

Ignatius "Nate" Ramirez is not only a scarred fire-jumper with a justifiably bad attitude toward women, he’s also under strict orders by his Captain that if he doesn’t get laid on his vacation, he’s going to bench him. After finding out about 1Night Stand, he requests Madame Evangeline find him the perfect fantasy woman to have under the cover of darkness. Figuring he’ll have a better chance with his date with all the lights out, he wasn’t expecting a feisty, no punches pulled heiress to knock him off his feet.

A blind woman and a scarred fire-jumper should be a match made in heaven, but will Nate and Xaviera manage to leave their baggage at the door and find love all in one night.

“Good to know. Now, shall we get to it? I haven’t felt a man’s touch in two years and I’m finding myself rather anxious.” Her plea became soft and coaxing. “Nor have I felt a lover’s skin under mine. The only question is, will you be the one to break my dry spell?”

“Fuck yeah.” All thoughts of going slow were consumed by the undisguised need in her words. Using the fact his vision was already used to the darkness, he pushed her back on the bed before covering her mouth with a needy kiss. Damp lips parted under the pressure before the moist tip of her tongue slipped past his teeth to duel with his. A low, satisfied grunt pushed out of his chest when her slender arms wrapped around his neck.

Using his strength to his advantage, he half dragged, half lifted her farther up on the bed. Under him, her peaked nipples budded through her dress to rub against the bare skin of his chest. He was grateful he’d shed most of his clothes before she’d arrived. When she was where he wanted, he sank down over her, his hips parting her thighs.

The cool cotton of her dress brushed his sides. Gathering a handful, he hauled it up, loving the feel of her skin against him. Mindless with desire, he rocked against the cradle of her thighs, wanting nothing more than to sink into the hot, wet depths pressing against his stomach. Son of a bitch she’s so wet I can feel it through her panties. Lifting his head, he drew a ragged breath, trying to slow down before he lost total control. “Damn, woman—you’re like fucking dynamite.”

Her fingers dug at his shoulders while she tried to pull him closer. “More! Don’t stop.”

Her desperate plea made his nuts tighten. “Not a prayer in hell. The hotel could be on fire and it wouldn’t stop me.” He reached out to trace a finger over the scalloped edge of her dress, teasing the rounded swells of her breasts. He couldn’t see them clearly, but he needed the offending cloth gone.

“How does this come off, sugar?” Not waiting for her to answer, he slid his hand under her, searching for buttons, a zipper, hell, anything that would tell him how to get the dress out of his way.

“Over my head.” She breathed the words into his ear. Her tongue darted inside before abandoning the interior to nip at the lobe. “Sit up for a second.”

He growled. The last thing he wanted to do was let go of the warm, sexy body under him. “Don’t wanna.” Licking her collarbone, he ground his erection against her mound.

“Only for a minute.” She whimpered when he captured the tight nub of her breast, cloth and all between his teeth. He’d never heard anything sexier in his life. The urge to get inside her—to ride her, had him in its grip. His aching cock didn’t care about slow and steady, it wanted fast and furious.

Her fingers dug into his hair when he switched breasts. Yanking one of the straps down far enough to loosen the top, he nosed aside the fabric as if in search of hidden treasure. Licking and nipping at every millimeter of skin he exposed, he grew close to finding it when she yanked hard on his hair. “Stop! Let me up, you teasing ass.” Her breathing sounded harsh to his ears.

His lust-dazed mind tried to make sense of her words.

“Now? You wanna stop, now?” He yanked hard on the reins of his control, not so far gone he’d force an unwilling woman. His daddy had beat it into his head. It didn’t matter if he had the head of his dick in a woman; if she said stop, you rolled off her and found the nearest body of cold water. No meant no. “Fuck!” Rolling away, he stood up, his body screaming in protest. The need that had been riding him earlier was minimal compared to the inferno inside him. Locking his hands behind his neck, he took deep breaths to calm himself while ignoring the rustling sounds behind him.

“Nate?” She touched his lower back.

He trembled as if a lash, rather than her soft hand, had touched him. His control was almost gone, making his tone gruff. “Yeah?”

“Get your ass back over here and finish what you started.” Her finger curled around one of the loops on his shorts. “And don’t forget the damned condoms because I’ll kill someone if you stop again.”

©Dakota Trace All rights reserved. This is a work of fiction. All names, characters, locations, and incidents are products of the author’s imagination, or have been used fictionally. Any resemblance to actual persons living or dead, locales, or events is entirely coincidental. No portion of this work may be transmitted or reproduced in any form, or by any means, without permission in writing from the author.
Posted by Dakota Trace at 11:49 AM