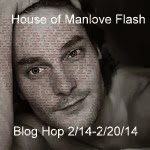 When I saw this blog hop on Facebook, I just had to participate. As a reader I love reading follow ups on my favorite couples, so as an author I adore it even more. (Which is probably why I write so many series...I get to peek in on my former characters.) Of course as soon as I heard about this hop, my brain immediately went to my first big m/m book with Decadent Publishing, His Just Desserts. I fell in love with both Isaiah and Sean - despite their stubbornness.  So what you have below...is a delicious peek at what my sexy chef and his attorney have been up to since we left them so long ago.  (Also...don't forget to stop by the rest of the contributors...CLICK HERE.)

"What the hell…” Sean Whitcomb scanned the neatly printed recipe next to him. Confusion swamped him. “…do they mean place the jam in a piping bag?”


Around him the kitchen looked like a tornado had hit it. Piles of flour, clumps of butter and broken egg shells littered the surface of what had once been his husband’s clean island counter top. In the sink were several bowls with his previous failed attempts at dough. There was even a roll of parchment paper half unraveled and dangling off the counter next to it.

“How does Isaiah always make this look so easy?” He raked his sticky fingers through his blond curls, uncaring if he coated the strands with dough. If it had been any other day than Valentine’s Day, he’d have simply gotten the ingredients. Then suggest in a sexy manner that his man help him in the kitchen. As a chef, Isaiah had taken him up on such an offer more than once.

“Instead he’s working tonight at the restaurant.” Sean jerked open a drawer. It would help if he had a clue what a damn a piping bag was. “I should’ve never listened to that fool! I should’ve just gotten him chocolates, but that damned pastry chef said this dessert was easy. That Isaiah would jump my bones if I made it.”

Sean froze. “Rostislav! He’ll know what a piping bag is.” Fumbling open his cell phone, he dialed Nonlia’s. He wasn’t surprised when Kaeli, the Front of House Manager, answered.

“Isaiah? Let me see if your man is around. But let me warn you, he’s been on the warpath tonight. His new sous chef didn’t show and Laco called in sick.”

“Wait! Don’t! I need to talk to Rostislav – it’s about this damned recipe.”

“Oh…really?” A low chuckle filled his ear. “Well, that’s different. He just got done presenting Bananas Foster to a couple celebrating their fiftieth anniversary. Let me grab him before he heads back to the kitchen.”

Moments later, the slightly Russian-accented voice of Nonlia’s pastry chef came on the line. After he explained the problem, Rostislav sighed.

“Look in the canvas tote I dropped off. There should be a plastic tip and white triangular bag...”

Squeezing the phone between his ear and shoulder, Sean scooted around the island, only to slip on the broken egg he’d forgotten to clean up.

He stumbled before knocking his elbow on the edge of the granite counter. Pain lanced up his arm as he struggled to regain his balance. Then he heard a large snap. Horror filled him. The canvas bag under his left foot mocked him.

“Please – don’t let it be broken!” Retrieving the tote, he dumped the remaining contents onto the counter. The plastic bag fell out along with several pieces of what used to be a red plastic tip. “Damn it!”

“What happened?” Rostislav’s concern filtered through the phone.

“I broke the damned tip.” Wadding up the canvas tote, Sean tossed it across the kitchen. Tears threatened. “Fuck it, I’m not a chef. I’ll just buy him chocolates.”

“Whoa. Slow down, Sean. If you’re ready to pipe the jam, you’re over half way done. Did the dough turn out?”

“Yeah, but how am I gonna finish it without the piping bag? Isaiah be home in less than an hour. I don’t have time –”

Rostislav’s chuckle surprised him. “Got any Ziploc bags?”

Isaiah Waterston-Whitcomb groaned as he exited his car. It’d been a long night at Nonlia’s. He’d been anxious to head home to his husband ever since Kaeli had told him he was going to be down two men.

Shoving the key into the lock of their Tudor style house, Isaiah was struck by a sense of homecoming. The perfect home with a small guest house out back for Berta, his former roommate and best friend. It had been the perfect second year anniversary present - and everything he’d dreamed.

“Babe?” He placed his keys on the hook next to the door, looking around for Sean.

Following Sean’s voice into the kitchen, he stared in shock at the carnage of what had once been his immaculate domain. His temper, normally even no matter what mess his cooking-challenged husband made, finally exploded.

“I tried to bake for you.” Sean popped up from behind the island, a paper towel in his hand. From the smeared yellow on it, Isaiah could only assume it was egg. “I baked for you.”

His anger died a sudden death when he took in his sexy lawyer’s clothing. Even smeared in flour and something red, Sean looked beyond edible.

“Aw, babe.” Picking his way over to his man, he pulled Sean into his arms. “I’m sorry I snapped. Rough night.” Tugging down Sean’s head, he ran his tongue across his husband’s lower lip before delving inside to entwine with Sean’s.

As usual, the passion that always simmered beneath the surface exploded as Isaiah tasted a hint of his favorite fruit. Sean’s arm wrapped around his waist and Isaiah found himself pulled between his husband’s slightly splayed legs. By the time, he released Sean’s mouth, his lover’s cock was hard against his. “Damn, you taste like raspberries.”

The flush of arousal on his husband’s face sent Isaiah’s libido into overdrive. He wanted to put his piss-ass night behind him and celebrate Valentine’s Day – in bed with his man. “Come on…” He snared Sean’s wrist with his hand. But when he tugged, Sean seemed to snap out of it.

“Why? I’ve thought of nothing more than sinking deep inside you as you hold me, since my night went to hell. I’m desperate.” He brushed his fingers over Sean’s cheek. “Please?”

Sean groaned. “Just a second. I made these for you.”

He watched as Sean pivoted to grab something behind him.

“Here, baked with love.” Sean thrust out a plate.

Two beautifully imperfect heart-shaped cookies rested on top of a folded paper. His heart softened. The slightly crooked edges were a testament of Sean’s love. His husband hated to cook.

Touched that Sean had baked for him, he took a bite out of one, determined to enjoy it, even if it was the worst thing he’d ever tasted. To his surprise, the buttery flavor and tartness of the raspberries was delicious. “Yum.” He shoved the rest of it into his mouth, chewing fast. Swallowing, he shot Sean his “I want to fuck you now” look. “Bedroom – now.”

Growling, he snatched the document up. As he scanned it, joy flooded him. “We’re gonna be daddies?” He caught Sean’s gaze.

Sean nodded. “The agency called. We can pick up little Angelina tomorrow, if we want.”

“Hell yeah, I want. But first I’m going to rock your world, Mr. Whitcomb.” He dragged his chuckling husband toward their bedroom. If Isaiah had his way, Sean wouldn’t laugh for long. He’d be too busy moaning. After all it was Valentine’s Day – the day of lovers. Tomorrow, they’d be parents. 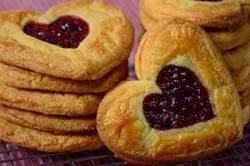 So after writing this flash, I realized that there may be some readers who would like the recipe for the delightful Raspberry Butter Cookies that Sean attempted to make for his lover. CLICK HERE. (Personally I've tried it...and they are absolutely delicious.)

Now, don't forget to stop by the rest of the hop!