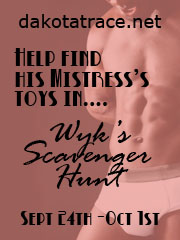 Sweeping into Livvy's playroom, I glared at my muse. "What the hell is the meaning of this!"  I held up the slip of paper. "Does this mean what I think it does?"

Livvy looked up from the glossy magazine - a Playgirl, if I wasn't mistaken. "A quote from Wyk's Surrender?"  She actually had the audacity to roll her eyes at me. "No offense, slave, but I think you're a little slow on the uptake."

"Slow?"  I was ready to come unglued. This madness started a week ago. My little lying, thieving muse decided in her great wisdom that stealing, then hiding Mistress Venus's toys was a great idea. "You told me - told me that you didn't have any of the toys. That you hadn't hidden any on my blog!"

"Nope no toys." She snapped her gum and flipped the page. "Sexy personal apparel, yep." She winked at Wyk who had just toted in a huge box of Girl Scout Thin Mints with him.
I was sinking - unable to hold onto my anger. They were playing dirty pool here. I didn't just love Thin Mints, I had a running love affair with them. "That's not fair, Livvy."  My mouth began to water in anticipation.

"Whoever said anything about playing fair." She tossed her hair over her bare shoulder. The sexy oriental inspired corset left lots of skin bare but still managed to cover the important bits.

"You know resistance is futile."  Wyk whispered as he set down the chocolates. "Staying angry at Livvy is impossible."

Boy didn't I. "It doesn't matter. She lied to me. She lied to your Mistress. Now I have to face Venus and tell her that Livvy hid something on my blog and I was so oblivious I didn't even notice!"

He squeezed my shoulder. "Aw, don't be so hard on yourself. That muse of yours is sneaky. She likes pushing your buttons."  He leaned in. "But trust me. This time she's going to get her buttons pushed. Mistress has a surprise in store for her. One that she won't be able to wiggle her little ass out of."

I chewed on my lip. I was intrigued. A surprise that my muse couldn't sweet talk her way out of? That sounded wonderful. As long as it didn't hurt her.  "No permanent injuries right? I still need the little baggage."

"Of course." A sexy smile crossed his face. "Of course, there's a price I have to pay, but it will be worth it."

"Of course. Did you think I'd let my sub go unpunished?"  Mistress V sauntered into the room holding a leather duffel bag. "I do believe you have some toys for me, Muse?"

Livvy looked up from her magazine, to gesture vaguely to the table in the corner piled high in the corner.  "Over there."

Venus handed the bag to Wyk. "Go retrieve my toys, pet." She gave him a sharp whack on the ass as he turned to do her bidding.  I couldn't help but chuckle at how fast he moved to obey.

"Got him well trained already?"

Venus smiled. "Perhaps not as well trained as I thought. He still struck out with you and your muse despite my order to the contrary.  But no matter, he will pay."  Venus stepped up to where Livvy was reclining. "Okay where is it?"

Instead of blowing her stack like I expected, Venus gave a dangerous smile.  "Dakota, why don't you tell the lovely readers about the contest while I convince your muse the error of her ways?"

"Sure, why not..."  Behind me I could hear Livvy squeal. It wasn't a pain squeal but one of protest. "Just ignore them. Lets get onto the contest.  For those of you who've been hopping you know the deal. Collect the word off the graphic below and enter it into the rafflecopter form to be entered to win a prize basket including a flogger, pleather cuffs, a sleep mask and an e-copy of Wyk's Surrender.  And a special bonus: Collect all eight toys and be entered for a $10 Amazon Gift Card.  Pretty easy huh?  I'd like to think so.  I'll be announcing the winner at Wyk's Wrap-Up Party tomorrow on Facebook between 7pm-9pm."

Another squeal came from behind me. I turned to peek and nearly died.  Venus had somehow managed to tie my muse up in some type of shabari harness suspended from the ceiling. But it wasn't the fact she was suspended that surprised me, it was the long white feather Venus was running up and down the sole of Livvy's feet.  The  ball gag in Livvy's mouth kept her from screaming.

Wyk came out of the other room, zipping up his pants. I froze and did a double take. What the hell had he been doing...  "Is everything okay?"

He nodded. "Yep. I needed to put on the "personal" item that Livvy stashed back."

He pointed to the graphic. "That. Mistress says for my stunt, I have to wear it til she says it can come off."  He leaned in. "I have a feeling I'm going to be in for a long night."

"You bet your ass, you are." Venus swiped the feather up the inside of Livvy's thighs.  My muse convulsed and laughter spilled around the ball gag.  I swear I don't know who is more ticklish, me or her - but at this moment I was glad that it was her and not me.

I shook my head.  "Okay, I'd like to thank you all for participating in the scavenger hunt  over the past week and remind you that tomorrow is the Wrap up Party and then on Oct 3rd I'll be appearing on Between Moonlit Covers with Kali Willows from 10 - 11pm CST.  I'll be talking about Wyk and Venus, 1NS and pretty much anything else that might come up."

She wants to mark him and make him hers…Mistress “V” lusts after her boss. She wants him at her mercy, begging for her touch, but he only knows her as his very capable assistant Venus. When an off-hand comment dashes her hopes, the sexy domme turns to Madame Eve at 1Night Stand for help…He isn’t sure he can handle the dark pleasure she promises…Living up to his father’s expectations has driven Wyk Havas to the edge. His curvaceous assistant Venus wants to push him past those limits, and he’s damn near attracted enough to try. But Venus’s preference for men to submit to her threw him for a loop. Can a date from 1Night Stand show him if he’s able to submit to a woman?
Can Wyk truly surrender to Mistress V’s pleasure or were they doomed from the start?


©Dakota Trace All rights reserved. This is a work of fiction. All names, characters, locations, and incidents are products of the author’s imagination, or have been used fictionally. Any resemblance to actual persons living or dead, locales, or events is entirely coincidental. No portion of this work may be transmitted or reproduced in any form, or by any means, without permission in writing from the author.
Posted by Dakota Trace at 1:19 AM