Touching the Gods by DX Lux

Have you ever wondered what it would feel like to be surrounded by ultimate power and equally loved by such an intimidating force? That's where Touch of the Gods: The Wager comes in.

Though the inspiration came from my eight years old daughter, when it came down for me to imagine the plot, I thought back to how much I used to wish Greek gods weren't myths. I wanted to experience them, love them just as they showed on Hercules: The Legendary Journeys. Since that was not feasible giving a heroine the chance to have one of her own had to do.

Hephaestus, Ares, Eros, and Himeros were the ones chosen for my tale. Heph, the lame god of inventions, blacksmiths, and volcanoes is the hero on a forced mission. Part of a wager he seeks to find the love of his life down in the mortal realm and immediately falls for Vanessa.

I am the first to say that I felt some jealousy for my character, Vanessa as she was living the dream, in my opinion. Yes I created her, but hey I see everyone I write as a separate entity and she was getting herself a yummy god! Not only that, but another pined for her. She has two immortals with the power to create and destroy at her disposal. What's a girl to do?

Yet even while I enjoyed writing what it would be like for an every day mortal woman to touch the gods, I also concluded that it could be very hazardous to one's health. This is seen when reading Touch of the Gods: The Wager.

So I guess the real question would be if you are willing to suffer the consequences just to be with such entities? To be touched by the gods? I'm going to still stick with a resounding yes!

An avid reader since I was a child, I never found a book I disliked. Mostly, you could find me lost in Shakespeare, Edgar Allen Poe, or Ernest Hemingway, and my most favorite, Ancient Greek literature. Taking my love of books, I started writing poetry, short stories, and even helped with screen writes for my drama club.

After being convinced that I had the skills to try my hand at writing, I went to work on my first story Down the Yellow Brick Road: Finding Home. And since being published, I've not looked back.

Now, as a busy mom of three, that homeschools, drives to activities, and manages to find time to just cuddle with my husband of ten years, I have to say, I love being naughty when I get the chance. It's freeing and I wouldn't want it any other way!

A Touch of The Gods 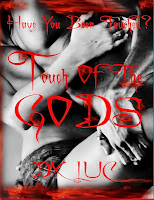 When love and war makes a little wager, what could possibly go wrong?

I am Hephaestus. God of inventions, blacksmiths, and volcanoes. Sounds like I'm awesome right? Well, I'm not. In fact, I'm the loser of Olympus and a new bachelor to boot. Living the single life is great until a decade passed. Honestly if my divorce from the Goddess of Love
wasn't bad enough, I am still being rejected by the other women of my home.

Because of an incessant need to make me a pawn in his game, my brother, Ares convinces Eros to make a little bet. A wager that puts my lack of love life to the test. Sent to Earth, I'm skeptical, when suddenly I lose myself in the sensual scent and beauty of the full bodied
Vanessa. She is my everything, my perfection.

Sadly, from a single caress upon her silky flesh, I sent our lives into a downward spiral of hell. To save her, I must get beyond my demons of the past. And to save me, she will have to decide if I'm worth giving up everything for.

Other Stops on the Touch of the Gods Blog Tour