Over the weekend, I polled a few peeps on Facebook to see what they thought of this new trend of writing a serial stories. These are in essence a longer piece of work which is broken into installments, kind of just like Charles Dickens did when he wrote a Christmas Carol, but instead of each portion being published in the newspaper, serial stories are sold at Amazon, Barnes and Noble and other vendors in an e-book format.

So after getting a consensus from several readers of my popular Doms of Chicago series I've decided to explore this trend and write a serial story set in Nisey and Caelan's world. Analise in her tale, Analise's Journey, will enter their world and while my current characters won't be the focus of this serial, they will make cameo appearances as she explores, changes and hopefully learns to accept her own needs.

Below is a blurb for her tale and a super sexy cover which will grace her e-books. Not to mention you can click HERE to find out more about the release dates (February 14th for the first episode), along with descriptions and excerpts.  But before I reveal all, I have a question for you readers out there.

What would you expect to pay for an episode? Take into mind these episodes would run about 5 - 7K or approximately 20 to 25 pages each?

Comment below with your suggestion and your email address, and I'll enter you  in a raffle to win a free copy of the first episode when it comes out on February 14th. 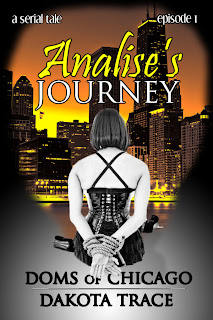 Blurb: Fresh with a new degree in advertising, Analise Rochon has finally moved to the big city after landing an intern job at one of the best ad agencies in town. She’s studied hard, gotten good grades, and has a natural talent and curiosity that her instructors have her praised her for, but she’s in for a culture shock when she arrives in Chicago. This is no small town in Iowa. Come along as she explores not only the city, but the darker side of her own sexuality in unfamiliar world of BDSM. As her response to not only one man but two grows more intense, she has to decide if she can accept what her new life has to offer, or go home…where it’s safe.

©Dakota Trace All rights reserved. This is a work of fiction. All names, characters, locations, and incidents are products of the author’s imagination, or have been used fictionally. Any resemblance to actual persons living or dead, locales, or events is entirely coincidental. No portion of this work may be transmitted or reproduced in any form, or by any means, without permission in writing from the author.
Posted by Dakota Trace at 10:30 AM