A Peak Inside an Author's Mind

Today I'm so lucky to have fellow friend and author, Ashley Blade stopping by my blog  and she's promoting her newest book with Belladonna Bordeaux from Cobblestone Press. Congrats Girl! She'll also be giving away a free copy of Safe Harbor to one lucky commenter, so be sure to comment at the bottom of the post and include your email address so she can email you if you win. She's planning on drawing her winner on Feb 2nd.  Sooo....without further ado, her she is to talk about how it is to write her first sci-fi book. Take it away Ashley!

Space, the final frontier...wait that s already been done before. Lets see, Buck Rodgers, yep done. Duck Dodgers? Yeah, even that irritating self absorbed duck has done Sci-Fi too. Hmm...there have been Aliens, Predators, there have been Space Balls and Space Pirates. Serenity and Firefly. Dr. Who is a good one. Torchwood. Mmm, Jack Hotness...I mean Jack Harkness. Ianto...even better. *Sighs wistfully, before shaking my head* So Ashley, what's the point?

Here is the point. Even though I have watched my share of Sci-fi, I've never written it before. Shocking I know. How can this be you might even ask--while biting your fist to keep the shriek of indignation from passing your lips. Well, I just couldn't wrap my brain around it. In all seriousness, although I love Sci-fi, it's intimidating as hell. You have these worlds made of beings who don't look like me or act like me. Eminem would be proud of me, I just stuck part of his lyrics in here. Did you catch it? Rewind, go back, see it now? *Grins*
Anyway, so here I am working with Belladonna Bordeaux on this series, On Location. It's Sci-Fi. I think I died a little. She asked me to make notes add where I wanted to, question it and have fun! Oh joy. I think the first couple of times I read through the story, my hands shook, my brain ran a million miles an hour. Bella is a great friend of mine and I respect her more than I think she knows sometimes, so to be told, just do it, scared the shit out of me. Soon I settled though. I saw where I thought the story could be expounded upon and hit it hard. Of course, I watched my words and I didn't go all flutter-patted on it. I was conservative and tried to be the best writer I could be. In the end it came out great. Or well I think it's pretty great anyway.

Since then, it's only been a month peeps, I have been handed more work. Again, I repeated the process and this time I added allot less. I mean I squeezed words into it because the story, to me, was perfect the way it was. Of course I saw the things I would like to have extended just a little and that's what I did. Both stories were picked up by Cobblestone Press. AWESOMENESS!!!! Then Bella handed me this story, Mayday, contracted through Liquid Silver. I loved it from the get go. I mean it is a tech-geek paradise. Bella has a way with making alien technology realistic. I can't wait for everyone to see this story.

But we had a problem. Or well, Bella thought we did...I didn't see it. She worried. I wrote. *Laughs* It's funny how that happens. My mind goes from frantic author--it's missing something IMPORTANT to calm rational author--write it out. So I did...in the wrong POV. I died a little that day when she told me what I did. Granted, I am not great with POV, I have to constantly replay Law and Order in my brain to remember, if the person doesn't say it to the person explaining, its hearsay. If the person isn't telepathic, they can't know how someone else is feeling. It can be expressed through mannerisms but it can not be exacted upon. (Remember that peeps.) Not only that, but had I been paying attention to the ***** I would have noticed, we were back in HER POV...dumb ass. *smacks forehead* So I gave a great scene, but and this is a big 'ol but, *listens to the truck backing up the big but* it was in HIS mind. So I gave my friend more work, instead of less. *shrugs and mutters* At least she can't complain I wasn't keeping her busy....
Through it all I have had a blast. Bella has taught me some really great things. I have found that Sci-Fi is just like writing everything else, only I get to make up races and planets. In the end, a persons heart will always beat to the sound of their own drum and they will always find love. Or in some alien cultures, a mate. Love comes through actions not through words, for others. It's a great playground to dig around in...just stay out of the sandbox. You never know what creature was in there last.

Until next time peeps! 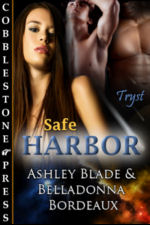 Blurb:  Kayleigh, a reporter for INTV, was supposed to be performing an in-depth investigation on the plight of the refuges from the Rhadarian conflict. The galaxy threw her a curve ball with a class five meteor shower.
The only thing that can protect her and her crew is a Dareaxian crystal.
A dying Dareauxia crystal.
Excerpt:
Chapter One