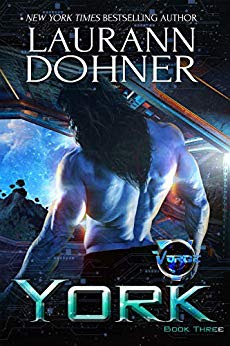 BLURB:
Watching his crewmates fall in love has left York craving a female of his own. That’s how he ends up being matched to a Parri female through a service to find bond mates. He’s excited at the prospect when he arrives on planet Relon. Until he actually meets her.

Betrayed by her government in a bid for alien technology, poverty-stricken human Sara is doomed to be a prince’s sex toy, until she’s rescued on a planet that doesn’t take kindly to slavers. Suddenly free, she’s an outcast on her new home, treated with distrust…by everyone except a gorgeous, kind, huge blue alien. Too bad he’s getting married the next day. His future bond mate is a horrid, abusive woman, and Sara has a way to save them both—she’ll convince York to bond with her instead.

Review:  First let me say, I've been a huge Laurann Dohner fan from the first time I picked up Fury, the first book in her New Species Series. I've read everything in that series, her Mating Heat series, her Zorn series as well as her Cyborg series.  Pretty much anything she'd put out when she was with E.C.   Even after they closed, I've devoured her new series - VLG books and her newest series The Vorge Crew.

York is the third book in that particular series, and one that I was really waiting for. I wanted to see the big blue guy get his story - particularly after Ms. Dohner let it slip in one of the earlier books that he likes to be told what to do in the bedroom - it's a quirk of his species - they enjoy catering to their mates every whim, and they don't just crave their mate's touch but need it to stay healthy.  So my little inner freak was definitely squealing about that.

Needless to say, once the book hit my reader on Tuesday, I spent part of Tuesday night unwinding with my reader in hand while my grandson watched his show on tv.  I thoroughly enjoyed York and Sara's story. Their chemistry and emotion closeness really drew me in. Ms. Dohner did a great job making both of their motives and reactions realistic. There was no sex just for sex sakes.  Even though it was a great book, it seemed to end too soon for me. I was hoping to see a bit more of a power exchange (that's the inner kinkster inside me) but even without that dynamic, the scenes were sizzling and very satisfying.  I give York 4 Naughty Handcuffs.