So once again it's time to participate in #MySexySaturday.   This week Lynn is challenging us to show what sexy is. It could be anything, the way your hero walks, the way he holds his woman, or in the case of my hero from Under His Domme's Control, it's all about how Steven gives over to his wife.   Don't believe me, check out the snippet below, then make sure to hit up the rest of the wonderful peeps on the blog hop - the list is at the end of my post.  I know I'm looking forward to getting ready to get my fill of smexiness....happy Saturday peeps!

She took a deep breath as he stopped at the second to top step. With their height difference, it put him directly at eye level with her. The desire in his eyes hadn’t dimmed since she’d left him at the shop; instead, it had merely been tempered by an uncertainty – one she wanted to banish.

Leaning forward, she kept her gaze on his while she slipped her hand behind his neck. A gentle tug, closed the distance between them. She brushed her lips over his, once again savoring the faint bitter flavor of her cream. She gave a soft growl, before nipping his lower lip. His lips parted on a moan, giving her access to all of him. Tightening her grip on the silky strands at the base of his neck, she thrust inside, tangling her tongue around his – exploring every inch of his moist mouth. She swallowed his soft groans as he strained to be closer, while keeping his arms crossed behind his back. She could feel the tension rising within him, the ever-present need for more. What had started out as a kiss of reassurance had quickly turned carnal. The type of lip lock that would end up with her pinned between the wall and her husband’s hard body – if she didn’t stop it now.

She tore her mouth away and released her hold on his hair.

His gaze, a molten toffee, begged for another taste. “Ma’am…”

“Playroom, now.” She forced a hard edge into her tone.

His nostrils flared, and for a second, she thought he’d fight the order. Instead, he licked his lower lip, and gave her a slow smile. “Yes, Ma’am.” 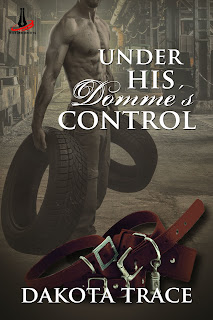 
Steven has slipped up by lying to his wife, now it's up to his Mistress to bring him back on the straight and narrow. But when he finds out the price for his deception will he still surrender?