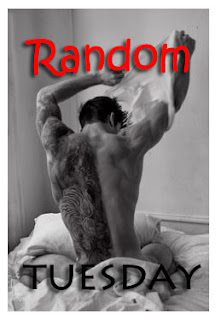 Welcome to another Random Tuesday.  Today I'm talking about songs that get stuck in your head. As an author, I like to listen to music as I write, but as a mother...well lets say some of my kids favorite songs get stuck...even when I don't want them to.  So below I prepared as short list - a top ten of songs that have been overplayed in the Trace Household because of my kiddos.

Dear Lord, I need to cancel the netflix - my youngest is addicted  to this show and if she's not watching it in a binge marathon, she's watching the youtube videos.  She loves Kurt and the middle one loves Sebastin....as in she wants to have his babies.  #motherofteenpromblems.

My daughter, the trumpet player, loves this song so much she tried to convince her Jazz Band instructor to add this song to their playlist.

You've never heard a song slaughtered until your oldest sings this song off key while listening to it on his headphones....*sigh*

Okay, this song almost didn't make the list, because I actually like this song - it grew on me. And I love the mashup video of the films that went viral.

This is my middle child's current favorite song...and is slowly skyrocketing to the top of the list.

This has been dubbed the break up song....need I say more?

I honestly wouldn't mind this song...other than the fact my daughters insist upon playing it in the car - so they can feel the car vibrate from the bass riff.

Don't get me wrong, I like Adam Lambert, and love the Voice, but if my daughter tells me one more time how Maroon Five crashed all these weddings in L.A. to make the video.....*sigh* patience Mom.

Okay, I loved this song when it came out. It's catchy, snappy and who doesn't love Bruno...but after listening to it for the millionth time on the radio, and then walking in to the house to see it playing on youtube and listening to it for two hours straight - I'm ready to scream!

My youngest is a huge R5 fan and has been listening to this since before Dancing With the Stars came out and Ross was featured in a clip with Riker and Allison. While it hasn't been overplayed to death (yet) - it has a catchy beat that once it gets in my head it takes a nuclear bomb to get it out. (It's like that annoying commercial jingle that gets stuck in your head) Somebody shoot me!


So tell me did any of my songs make your top ten "oh please make it stop list"?  If not tell me what has - and I'll commiserate with you.  (Something tells me that "Mmm-bop" might come up.)