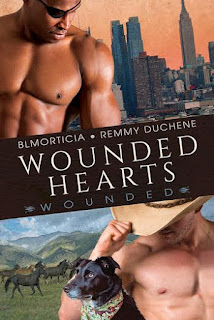 Zane Ashford’s stint in the NYPD comes to an abrupt halt when he is injured in the line of duty. After waking up partially blind in one eye, all he wants to do is crawl into a hole, but his friends and family won’t leave him alone. Reluctantly, he lets his best friend talk him into time away on a ranch in Montana. But the moment he gets there and meets Cyrus Abrams, Zane begins to contemplate murder.

Cyrus Abrams is vulgar, ornery, stuck in his ways, and not about to change for anyone, no matter how good Zane Ashford looks in those jeans. The more they lock horns, the more Cyrus begins to see Zane in a whole new light. But Cyrus has a past, one that left him in big trouble and more broken than he cares to admit—a past no one told Zane about. Cyrus fears that when Zane finds out, everything will come to a screeching halt.

A STRANGE beeping echoed around Zane Ashford in that moment between complete, dreamless sleep and being painfully awake. Then his body awakened and he felt his left eye hurting. Not the kind of pain from sitting at a computer too long, or even the sting from accidentally dripping shampoo in the eyes.

Panic set in. His body went rigid and the beeping around him went haywire. Hands held him against the bed, and Zane struggled to get away, to get free. Why wouldn’t they let him go, and why couldn’t he see through his left eye?

Zane surged upward, shouting for help. His mind was screaming I can’t see, but for some reason, something blocked the words from escaping.

His chest heaved, his heart slamming, as someone screamed at him to stop freaking out. But he couldn’t see. One eye was completely covered and each time he opened the other everything was just a blurry mess and that sound was starting to give him a migraine. Two hands clutched at his shoulders, pushing him backward, but he didn’t want to go back.

Please! I just want to see!

“Come on, Big Daddy. Snap out of it. If you don’t stop struggling, they’re going to sedate you!” The hands shoved hard against Zane’s shoulders. “Is that what you want?”

Zane gasped and opened the one good eye he could see through. Everything was a little blurry. Slowly, he came around from his daze and instantly felt like crying. There was no mistaking the tube down his throat. His brain kept telling him to swallow, but he couldn’t and he only panicked more. He snapped a hand from the person holding him and reached for it.

“Zane Alexander Ashford! I swear to God, I will knock you out myself if you touch that tube!”

Still, he reached for it, but the moment he began tugging, there was a nick at his arm. At first, surprise stopped him from taking the tube out, then the world crashed in on him, spun, and went dark.

There was no telling how long he was out, but the world swam in on him like a bad movie, shaking horribly into focus. The pain was there again, but this time he remembered what had happened. He could hear the doctor speaking over him as though he wasn’t even there.

Once again Zane drifted into a quick sleep, but the beep woke him.

“…I don’t know if he’ll ever carry a badge again… physical….”

The memory of the heated char of a bullet from a perpetrator’s weapon burned in his mind, the pain unlike any other.

He’d gotten his man at a terrible cost.

“What for?” Zane’s throat felt rough and he coughed. He wasn’t sure which he preferred yet, the tube in or out. Either way his throat still felt as if he’d swallowed sand.

“So you can see my beautiful face.”

Zane tried to harrumph but failed.

“Because there is a whole world out here!”

Zane wanted to tell Renford to kiss the blackest part of his ass, but he was concentrating on the dryness in his throat. He cleared his throat, trying to be less of a burden than he knew he already was and not ask for something to drink. “How long have I been under?”

“Three days,” Renford replied. “You were in a coma because there was some swelling. They were worried you might have had some damage, but it seems your brain is working just fine.”

Renford reached for a cup on a nearby desk. Zane wanted to take it and drink on his own, but he could barely sit up. Renford must have noticed and helped Zane ease forward so he could drink from the straw. He pulled greedily from it.

Zane ignored the warning and sucked until he could barely breathe before releasing the straw. He eased away from Renford and flopped back to the pillow. The hospital smell made him nauseous, and every sound was reason enough for him to worry. Detective Zane Ashford had been in too many hospitals when a perp or a victim was dying. He knew the sounds.

Someone crashed, and a loud alarm with an animated voice screamed Code Blue! Hurried voices and footsteps charged down the corridors. Someone was hollering for a cart as a voice boomed over the intercom.

The noise was almost too much to bear, but the darkness inside his own head was worse.

“…it really isn’t as bad as it could be,” Renford was saying.

“What?” Zane shook his head to clear it. “Sorry—all the chaos outside kind of distracted me.”

“I know this may be boring, but pay attention! The doctors say you will have to wear that thing for about six months.”

Zane lifted a hand to touch the patch and couldn’t help feeling like a pirate—a horrible one who should no longer be a pirate but cannot give up the life. “Well, shit.”

“I know you don’t want to hear this.” Renford’s voice was raspy, like he hadn’t used it in a very long time. “But it could have been worse.”

“And how could this possibly have been worse?”

“You could be dead.”

Zane frowned and tried rolling away. Renford was trying to make him feel better—or worse, he couldn’t figure out which. The pain meds, though wearing off, still had him a little hazy.

Renford only called him by his first name when something was serious.

“You don’t get it, do you?” Renford exhaled, long, hard, and loud. “I don’t care how much of an asshole you want to be to me now. I would rather you half blind than not here.”

“That is not your call.”

“Well, you know what?” Renford snapped. “It’s not your call either, so too fucking bad! And another thing. If it was my call, your dumb ass wouldn’t have gone on that bust in the first fucking place! I’m tired of losing people, Zane. I. Am. Tired.”
Posted by Dakota Trace at 12:30 AM