So this week we're supposed to be thinking about timeless love. Of course brings to mind a book that I wrote several years ago. It was about a Dom who waited years to claim the perfect woman for him.  His Christmas Gift: Myrna's Submission, is the story about a man and woman who are facing their golden years alone, until a Christmas miracle happens. Enjoy and don't forget to stop by the rest of the peeps. 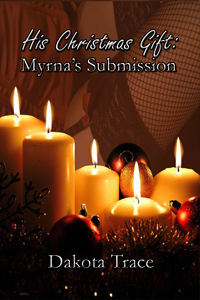 “Look at me, slave.” His sharp voice broke through her musing. “You may call me Amery when we’re not in a scene but anytime I put this on you…” He leaned forward with a slender velvet choker with a beautiful pearl ringed cameo inset in its lush fabric. “…I expect to be referred to as Master.” When she opened her mouth to protest, he arched an eyebrow at her. “I know you think you’ll get out of your punishment for using my name during a scene today. I’m telling you right now, claiming ignorance at this late date will not do. You knew we were participating in a scene.”

She bowed her head and nodded her understanding.

“Good, now that we have an understanding, I want you to wear this for me. This will be your public collar. I’m not like some of my friends who demand that their subs wear their play collars twenty-four/seven. You’re an older submissive who deserves a more tasteful collar for times when we are in public.” He grinned at her suddenly. “But make no mistake, Myrna, I have a leather collar with a nice sturdy hoop on it with your name on it waiting for you. Now before we go any further, I offer you this collar and all it entails. With your acceptance, I’ll become both lover and protector of you. I’ll care for you, body, heart and soul. You shall be mine to punish and love as I see fit. In return, I shall give you security, trust, and pleasure unlike anything you’ve ever known. Do you accept, Myrna Doherty?”

Staring up into his dark eyes, Myrna had an inexplicable feeling that her life was about to change. Whether for better or worse she didn’t know. The idea of Amery actually being serious about having a long-term Dom-slave relationship with her boggled her mind.

“Myrna?” He thumbed her lower lip. “Please let me show you what you’ve been missing all these years. No man will take better care of you than me. Take a chance, sweetheart. You won’t regret it.”

If he’d demanded she accept his collar or tried to seduce her into accepting it, Myrna would’ve been able to resist. But instead she lightly nipped his thumb where it rested on her lower lip before sucking it gently inside her mouth. Sucking on it and twirling her tongue around the salty skin, she finally released it with an audible pop. “Yes, Master, I accept your collar.” Even as nerves jumped in her stomach and she waited for the uncomfortable feeling of entrapment, nothing occurred. Instead her heart pounded as his calloused hands brought the choker up to her throat. She swallowed when the sensual velvet brushed against her skin. A moment and a few fumbles later, her new Master had her collar clasped securely around her slender neck.

If she’d expected him to savor the moment of her collaring, she was sadly mistaken. As soon as the small silver clasp at the back of the choker was fastened, Amery moved away. He sank to his knees in front of her. Kneeling on the pillow she’d abandoned earlier, he grabbed the second one, lifted her hips and shoved it under her before ripping her panties in half. A startled cry escaped her tight throat as two pieces of silk fluttered to the train floor. He just ripped off my panties!

Email ThisBlogThis!Share to TwitterShare to FacebookShare to Pinterest
Labels: #MySexySaturday