So once more it's time for some #MySexySaturday fun. I finally managed to dig my way free of edits and let me tell you...it'll be fun to get a chance to write something that has nothing to do with shapeshifters.  But until I manage to start working on my newest WIP with Evelise Archer, I've got seven more sexy paragraphs from Taghte: Wolfen Bonds.  And this time I even added a bit of eye candy for those of you who like that kind of thing. I don't have cover art yet for this delicious book, but hope to have some soon. So enjoy the inspiration for my yummy Matthias and seven sexy paragraphs between him and Andy.

In this scene, Andy quickly finds out that Matthias isn't one to be triffled with...not unless he's prepared to pay the piper...Enjoy and be sure to check out the rest of the sexy contributions to this week's blog. 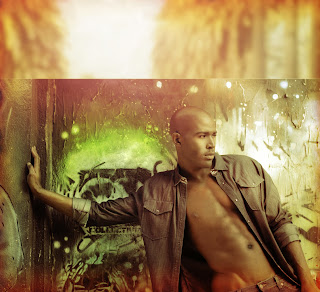 As a pack enforcer, Matthias Galloway has just taken over the MacDonald Pack by order of the High Council. He's the eighth wolf since the death of original alpha over a century ago. While it should be an opportunity of a lifetime for an enforcer, it comes with a catch - the elders insist he be mated. In love, he jumps at the chance to finally claim, his long-time lover and friend, Andrew as his own. As the nephew of a powerful Alpha and resident herbalist, Andrew is a coveted commodity that Matthias's former pack will be reluctant to relinquish. But once Matthias has claimed his mate, he isn't about to let him go. Andy is his, and his alone. But neither men bent claiming one another expected a third male to be drawn into their bond.

Colleen Donghall, the granddaughter of the fallen Alpha wants nothing more than to be left in peace. As the female twin of a prophesied saviors of their race she's been cloistered in a rural Ireland her entire life. She expects nothing more than a lonely existence with her brother. So when she's drawn into a bond with two strange males from across the Isle, she’s shaken to her core. Especially when they assume she’s male. What could’ve possibly been a new beginning, now looks like the beginning of the end. Or so she thinks until her father orders her to find the men and set them straight. With her brother and teacher at her back, she obeys, never expecting the out-of control chemistry that erupts between her, Andy and Matthias.


Andy froze. Unease seemed to radiate off him. “No, there’s no other place I’d rather be, but I just don’t want you to regret it. You know my uncle won’t take this lying down. He’ll come after me, and with the battle you’re going to have once we arrive…”

Matthias growled. “You’re seriously not going there, mate. Not unless you want me to put you over my knee right now.” Leaning forward, he unlatched the seatbelt at his lover’s waist, then hooked a hand behind Andy’s neck. He tugged him across the expanse of leather separating them. As always, Andy moved into his arms with a whimper of need. It sent both lust and love straight through Matthias. This was his second-bond, his mate, until they decided to leave this world together. He wouldn’t let fear stand in the way of that.

Nuzzling the bare patch of skin above Andy’s collarbone, he raked his teeth over the mating mark. Andy groaned and squirmed against him. A low chuckle built inside of Matthias. He loved how responsive Andy was. It seemed all he had to do was give his mate the slightest touch. Instantly he’d turn into a writhing mass of need. “Does this feel like I regret anything?” He pressed their entwined fingers between their bodies. He hissed at the firm pressure against his swollen cock. More than anything he wanted to strip his mate of his jeans, bend him over the side of his truck and slide inside of him fast and deep.

“No…” Andy pulled his hand free to fumble with Matthias’s zipper. “Please, Alpha. I need.”

Grabbing Andy’s wrist in a tight grip, he pulled the hand away from him. “Please, who?” His demand came out as a growl, but he didn’t care. He might be the new Alpha of the MacDonald Pack, but there was no way he’d let his mate stand on formality.

Andy’s eyes widened and he stilled in his arms. The tension grew inside the cab until Andy gave a broken laugh. He lowered his eyes. “But you’re the Alpha now…I have to get used to calling you…”

After running his fingers through Andy’s hair, he used the length to pull his mate’s face back and expose his neck. “…whatever I want you to call me.” He stared down into Andy’s eyes. “And if I ever hear the word Alpha pass your lips again when we’re making love, you won’t be sitting right for a week. Am I understood?” He accented his question with a sharp tap to Andy’s hip, followed by a blatant squeeze to the erection straining the front of Andy’s shorts.


December 2013 ©Dakota Trace All rights reserved. This is a work of fiction. All names, characters, locations, and incidents are products of the author’s imagination, or have been used fictionally. Any resemblance to actual persons living or dead, locales, or events is entirely coincidental. No portion of this work may be transmitted or reproduced in any form, or by any means, without permission in writing from the author.
Posted by Dakota Trace at 12:30 AM