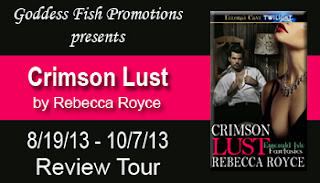 Hey Peeps - once again I have the pleasure of being part of one Rebecca Royce's book review tours.  I was super-excited once I read the blurb and let me tell you, I wasn't dissapointed...but you can read more about that in the review at the end.  Instead lets get to the fun stuff first.  How about the blurb and a nice steamy excerpt...oh and we can't forget the very generous prizes that Ms. Royce is giving away in conjuncture with this tour.  She's actually giving away to really cool prizes. An ebook off her backlist to one randomly drawn commenter at each stop (and yes that includes this one! - so make sure you comment!) And for a Grand Prize, a randomly drawn commeter will win a $50.00 Gift Certificate. Pretty sweet huh?  I think so.   So onward to the blurb! And don't forget the review at the end! 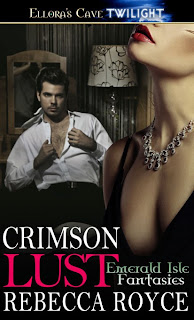 Felicity Hahn is a thief on the run in Ireland. She can’t go home and spends every day hoping Interpol doesn’t catch up with her. But when she steals a crimson-red necklace, she may have gotten more than she bargained for.

Cian Finnegan is a vampire who was turned outside the gates of Castle Tullamore over three hundred years earlier. He chases the woman who stole his necklace back to the Castle, now a hotel, both to recover his possession and because her scent makes him as hard as hell.

Can the magic of the Emerald Isles give these two a happy ending, or is it too late for them both?

BUY THE BOOK at THESE LOCATIONS
Publisher   Amazon    Barnes & Noble   ARe


Just outside of Castle Tullamore, 1615

“Stop him. He’s getting away.” The panicked voices of Chichester’s guards filled the almost dawn landscape, replacing the usual sounds of the curlew chirping, announcing the rise of the sun, the beginning of a new day.

Cian Finnegan grinned, pressing the necklace more firmly into his hand. They could search for him all they wanted—Chichester’s cronies wouldn’t find him. He’d spent enough time hiding out and running from authorities that he could virtually disappear from sight any time he wanted. No one knew the path he was walking even existed, thanks to the numerous landowners who had taken over Tullamore through the years. Thank the heavens for short memories.

And right now, given that he’d just stolen a small fortune in the form of a ruby necklace from the haughty Arthur Chichester, or to be more specific, Chichester’s wife, Cian had no intention of being caught with the pilfered jewelry. He’d sell it, buy passage on a ship heading for anywhere, and be done with the misery that was Kilmorny. Wherever he went, no one would know anything about his father or what the bastard had done to soil their name.

Somewhere where the ladies would fawn on him and the Chichester devils wouldn’t be staring down their British noses at the poor commoners too low for their haughty notice.

Cian stopped in his tracks. A shiver traveled up his spine. He turned around, scanning the area as best he could. The darkness didn’t bother him. He’d walked the dirt paths in the blackness enough that he knew every ditch, every large stone, every possible disaster. The sun would be fully up soon and the dots of light appearing over the horizon gave him more than enough brightness to navigate his surroundings.

So what had him jittery?

Nothing alarming called his attention. The air blew lightly around him. His friends would be long home from the pub, not knowing that he’d done what he always wanted to do, taken the crimson symbol of all that was wrong with his world right out from under their noses.

The guards were going the wrong way looking for him. He grinned. His nervousness had to be some kind of delayed reaction to the whole night. Nothing more. Unless the rumors proved true and monsters really did roam the countryside at night.  He turned back around. Nope. He would not—could not—let his imagination run away with him. Not when he’d got so close to acquiring everything he’d ever wanted out of life.

With his hands in his pockets, he strode down the path toward his small cottage. He’d spend one more night sleeping in poverty before he moved on to the next phase of his existence.

Soon, Kilmorny would barely factor in his memory. He rounded a sharp corner, colliding with something in the still-dark morning. Falling backward, he stumbled two steps before he caught himself. Dodging to the right, he tried to make sense of what had happened. What on earth had he run into? A tree? A wall? Had he misjudged his location?

“Easy there, Cian. You’re not going to find me swinging around like that.”

Cian jolted to the right, in the direction of the voice that had spoken to him. He hadn’t recognized it.

“Who’s there?” He tried wildly to figure out who he was talking with. Had the guards somehow found him?

“You don’t know me. But I know you. For the last three weeks you’ve traveled these paths at this hour. Planning something, were you? From the way you smell tonight, I’d say you accomplished your goal.” 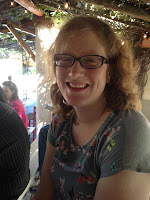 As a teenager, Rebecca Royce would hide in her room to read her favorite romance novels when she was supposed to be doing her homework. She hopes, these days, that her parents think it was well worth it.

Rebecca is the mother of three adorable boys and is fortunate to be married to her best friend. They’ve just moved to Texas where Rebecca is discovering a new love for barbecue!

She's in love with science fiction, fantasy, and the paranormal and tries to use all of these elements in her writing. She's been told she's a little bloodthirsty so she hopes that when you read her work you'll enjoy the action packed ride that always ends in romance. Rebecca loves to write series because she loves to see characters develop over time and it always makes her happy to see her favorite characters make guest appearances in other books.

In Rebecca Royce's world anything is possible, anything can happen, and you should suspect that it will.

FIND REBECCA ON THE WEB:

DAKOTA'S REVIEW:
What to say about this book. I loved Cian. He was such a flawed hero, but one who wanted to be better.  I also loved the chemistry between him and Felicity.  Very nice indeed.  I would say Ms. Royce perfectly matched up these characters and gave a unique twist with them - a twist I'm not going to give away.  I will say however there were times I thought my reader was going to melt from the pure tension between Cian and his lover.  So if you love a book that has a bit of darkness...well a lot of darkness, give this one a whirl. I'm sure you won't be disappointed.