After a short hiatus, I'm happy to be back and participating in Thursday Thrills. I honestly missed the challenge of creating a snippet from a picture that has been prechosen for me. (By the way, love the car for this week's picture.)  It's honestly a good way to challenge my wee little brain.  With that being siad, please enjoy the snippet below. It may not be the most erotic thing I've ever wrote but I'd like to think it might be the most poignet.  Also don't forget to check out  the rest of the peeps who participate this week. There names and links are listed below. 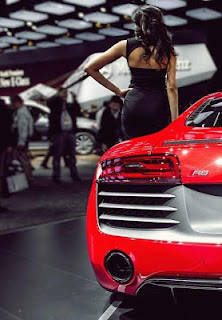 Long and sleek, the brunette slipped from the sexy red car, before turning towards the crowd. My hands which had been lifting my camera to snap yet another picture of the automobile, trembled when she turned my direction, revealing a profile that I’d known anywhere – that’s how etched it was into my memory. When I’d agreed to come to the convention to take photographs for our local newspaper, I had never ever expected to run into her here. My former Mistress never had expressed an interest in something as mundane as cars before.

A hint of a sensual smile teased her full red lips, I swallowed hard, my dick stirring. It was one I was all too familiar with. She was contemplating something naughty. My heart thudded in my chest even as a twinge of pain rolled over me that the smile wasn’t directed my way. There had been a time I lived to see it. Unable to deal with seeing what I wanted but was unable to have, I clicked one last picture – this one of her curvaceous form from behind as one hand rested on the car door. Her tight black dress snug across a delightful ass I’d kissed more than once, the cut out in the back of the dress, exposing the delicate skin between her shoulder blades. Everything about her called to me, but I was to resist. I couldn’t have her.

I had agreed to the six month hiatus as I perused my art degree. Even now I was kicking myself, it’d only taken a week away from my Mistress to have me crawling back to her. But she’d been firm. I was to take the six month break. It was non-negotiable. If I wanted her collar, I had to finish and graduation had never looked so far away. She told me her slave wouldn’t be an uneducated fool who would be lost if something happened to her. While I understood her reasoning, every part of me longed to be with her. I had to get out of here before I did something stupid like beg her to shorten the period.

I was just stepping back to blend into the crowd, when she shifted her position and her eyes settled on me. Unexpected heat, desire, and just a hint of her normal trademark distain filled her gaze. Like a deer caught in the headlights, I froze, unable to move as she studied me. It had always been this way. She was my Mistress, complete in her power over me, even now. After what seemed like an eternity, she covered the ground between us, until not even a scant inch separated our bodies. She took my camera from my now numb fingers, her beautiful blue eyes promising me untold delights.

Then she tugged my head down to take my mouth. My breath grew ragged. I needed her kiss, more than I needed to breathe. “You are mine, Luca…”

“Luca…dude, you’re supposed to be taking pictures.” Sam, the reporter who was covering the car event, shook me out of my daydream. “You’re going to get your ass fired if you don’t keep your head in the game.”

I nodded, lifting my camera to take a shot of the woman so similar to my Mistress. My heart sank as the model in the black dress finally turned to fully face me. It wasn’t her. The woman was pretty enough, but she wasn’t my Mistress. It had only been wishful thinking on my part.

©Dakota Trace All rights reserved. This is a work of fiction. All names, characters, locations, and incidents are products of the author’s imagination, or have been used fictionally. Any resemblance to actual persons living or dead, locales, or events is entirely coincidental. No portion of this work may be transmitted or reproduced in any form, or by any means, without permission in writing from the author.
Posted by Dakota Trace at 9:16 AM