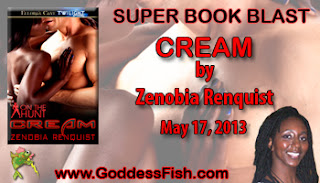 Lets give a warm welcome to Zenobia Renquist as she visits us today on a L.B.O.N.  She's here today promoting her new book with Ellora's Cave, Cream.  I've also been reminded by the lovely author to tell you folks that she's going to be raffling off a $25  Gift Card from Starbucks at the end of her tour to one lucky commenter. So make sure to comment at the end of the blog for a chance to win.  With that being said...lets get to the star of our show...CREAM. :D

She’s entered a world where blood, sex, and cash rules everything around her.

What do a four hundred-year-old vampire and a mid-level necromancer have in common? Money. Jeliyah needs it to pay off the people who trained her and Teaghan enjoys killing to get it. Together they hunt rogue vampires—assuming Teaghan can focus on something other than getting her in bed and Jeliyah doesn’t put a bullet in him first.

The uneasy partnership promises to be lucrative until Teaghan and Jeliyah get on the wrong side of a feud. Jeliyah is forced to use forbidden magic and finds herself bound to a man she should hate—but whom she can’t stop fantasizing about.

Every second they stay alive fuels a growing desire Jeliyah is unwilling to deny. Is it the magic? The danger? The only way to get the answers she craves is to outrun the enemy or kill them. She knows Teaghan’s preference but it’s Jeliyah who must put their mind-blowing sex aside and make the choice that will decide both their fates.

Teaghan kicked the room door shut behind him and then laid her on the nearest bed. “At least this time you’re not glowing. Let’s not make a habit of this.”

“Then again…” His gaze wandered to her breasts.

Images of Teaghan running his hands over her breasts and teasing her nipples entered her mind. She reared up and smacked him at the same time she brought her other arm up to guard her chest.

Teaghan didn’t react except to grin at her. “You’re flushed, necromancer. Your heart rate jumped too. My little idea get you all hot and bothered?”

She glared at him.

A mental picture of Teaghan yanking off her panties so he could run his tongue over her clit invaded her mind. The detail was so vivid Jeliyah felt her pussy twitch in anticipation. Damn the man and this stupid mental connection. It might be one way, but she had access to his thoughts and now he wasn’t trying to hide them. “You can’t do that without an invitation.”

“Shouldn’t you be going to sleep? The sun is up.”

“Sun’s got nothing to do with me.” He moved closer, planting his hands on either side of her legs and leaning into her. “Invite me.”

Jeliyah scooted back off the bed and away from him. Once on her feet, she said, “Don’t get all cocky just because I took some of your blood, vampire. I told you that was a one-time thing and not to get ideas.”

“Yeah, I heard you but,” he hopped the bed and crowded her against the wall, “here’s the thing. You could have gotten the same results by asking me to open a vein. A simple prick to the finger for a few drops of blood would have sufficed. You kissed me, necromancer.”

“It was a split-second decision. Back off.” She clutched the necrome at her throat and said, “Shield.”

Teaghan laughed as the shield expanded to include him. “Forget something important, did you? Your necromes recognize me now. I’m not a threat.”

Shit. She’d forgotten one of the major side effects of Recognize. Her necromes—and any others made from her blood—no longer worked against Teaghan. There was no way to deactivate Recognize either, just like an invitation once given.

She shoved at his chest but he kept leaning forward until his lips were close to hers.

He said, “Let’s talk about that kiss.”

“It was spur of the moment. It meant nothing.”

“Care to test that theory?”

“Kissing is the one thing I don’t need an invitation to do.” He pushed his lips against hers as he forced her hands over her head and pressed his body closer.

Jeliyah couldn’t turn from the kiss, though she tried. This wasn’t fair. Vampires needed permission to enter a person’s body. Why didn’t that extend to kissing? And why was she giving in to his kiss?

AUTHOR BIO:
Zenobia Renquist lives in her imagination. When not traveling through her fantasy worlds, she can be found in Hawaii living with her husband and two cats.

She is an Air Force brat turned Air Force wife, which means she’s accustomed to travel and does it whenever possible (so long as she doesn’t have to fly). Her favorite pastime is torturing her characters on their way to happily-ever-after for the enjoyment of her readers.

On the few occasions her muse flees the scene of the crime, Zenobia likes to read (comics, manga, and romance), go to the movies, play a few levels of whichever puzzle game has hijacked her interest or experiment with a new chain maille weave.