Today I have the pleasure of having a fellow No Boundaries Press Author on A Little Bit of Naughty. Please welcome Ellie Potts to the blog as she talks about her new release from NBP, Blood Witch.  She's also be generous and giving away a pdf copy of her book to one random commenter on today's blog post.

BLURB:
Welcome to the Opposite Side where monsters really do roam the night, but The Supervisors make sure that the monsters don’t get noticed by the normal humans. Meet Leslie, a Supervisor and a blood witch, one of four in California. Blood witches are said to have powers that rival gods, that’s why they were almost hunted to extinction. Leslie came into her power late, and fell in with the wrong crowd before she became a Supervisor. Nathan is king of the local werebear clan, and he has plans for the future of his pack, the other local shapeshifters, but also has his eyes set on Leslie. She is not your ordinary Blood Witch, and together they can stir up power that the world has never seen. But nothing is as it seems in the Opposite Side, and Leslie’s already different world is going to be shaken as a new case starts a chain of events that can lead to a feud war.

“I’m glad you and Nathan are getting along. I know he wasn’t very happy about me working or living with a blood witch. You guys are the equivalent to the bogeyman to the werechildren.” He swiveled towards her in the chair. They sat on two old wheeled stools. Bored, they were twisting and turning on them, waiting for the new vampire to rise. Sometimes they didn’t at all; if the other vampire had been weak the body would just die.

“Sheesh, thanks for sharing. I already feel bad about what I am, but I get reminded daily on what a monster I am. So maybe I get a bit wild once in a while, it’s not like I go all furry once a month and crave fresh meat.” She sat in her own swivel chair, arms crossed, pouting. Earlier they had raced around the room. Now they were just bored, after getting caught making gloved balloon animals.

“Les, you know I don’t mean anything by it. I was just telling you.”

“Sure,” she said making a paper airplane with a discarded piece of paper she had found on the counter. She finished and let it glide. It dropped near the door, crumpling on the floor. The mortuary assistant walked in followed by two men who looked at each other, startled. Leslie felt her chest lurch as her eyes fell upon the shortest of the men.

“I’m sorry, I must have gotten the rooms mixed up,” the assistant said to the two men.

“Leslie,” Rich said, trying not to sound as surprised as his brown eyes were letting on. She noticed his dark brown hair not only had some grey, but was also thinning. He pushed his glasses up on his nose, a sign of nervousness, his weakness in the wereworld. Jonathan hated when Richard showed his nervousness around the wolves. You can find him scolding the witch every so often about it like he was a naughty child.

She said nothing as the assistant led them away. The door closed. “Well, that was awkward,” Patrick said as Leslie got to her feet and went to the body.

“Patrick, why hasn’t the vampire risen yet?” She grabbed the sheet covering the body and pulled it off. “I’m sure it would have already.”

Patrick came to stand beside her and they looked over the body. “It’s rather old to be vampire bait don’t you think?”

“Where is the vampire bites?” She moved the head looking at the neck. She then pulled the sheet fully off the body. Her eyes looked lower for a bite, scanning every inch of the body.

Their eyes went to the door when a scream erupted in the hall. 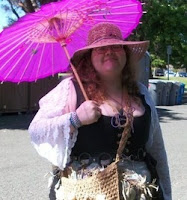 AUTHOR BIO:
Somebody told Ellie Potts you had to be rich to be eccentric otherwise you were just crazy. She set out to prove them wrong doing things she was told she couldn't do like dressing like a pirate, get her books published, playing video games, planning to survive a zombie apocalypse, and other antics most women stay away from. Her love of books motivate her and movies captivate her. She loves almost everything from Disney to George Romero. She lives in California's Central Valley where most of her stories and books take place. Her and her husband are owned by their attack Bugg (Boston Terrier/Pug), and her two red eared slider turtle minions who live in the backyard.


©Dakota Trace All rights reserved. This is a work of fiction. All names, characters, locations, and incidents are products of the author’s imagination, or have been used fictionally. Any resemblance to actual persons living or dead, locales, or events is entirely coincidental. No portion of this work may be transmitted or reproduced in any form, or by any means, without permission in writing from the author.
Posted by Dakota Trace at 2:30 AM