Okay, here's my Thursday Thrills. And after the seed from last week, my muse just begged me to write more about Talana and her reluctant mate, Bryer.   At the end of the post be sure to stop by the rest of the contributors blogs to see there take on this beautiful pool picture. 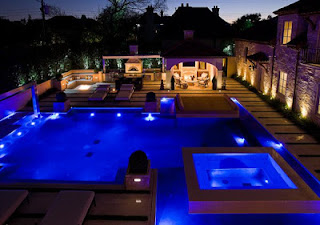 “I don’t give a shit about some fucking treaty, but they could take my restaurant, so I’ll play your game, sunshine, but once our week is up, I’m out of here so fast your pretty little head is going to spin. I will not let you take everything I worked so hard for away from me because you need your itch scratched."

Slicing through the water, Talana tried to drive her mate’s words from her mind as she made laps through the crystal blue water. She had expected some resistance from her siel eienaar, but this was beyond what her mother had prepared her for. As the man who owned the other half of her soul, this wasn’t supposed to be so difficult. But tell that to Bryer Dalton. If it hadn’t been for the treaty which requires him stay with me for a standard week or be found guilty of treason, he’d have never come with me. It didn’t help that frustration mingled with her mating lust, making her growly and unpredictable as beerkat in heat.

The sound of her first in command and dieDonker of her drieklank had Talana coming to a stop against the pool wall. Pushing her wet hair back, she looked up. Elizka was squatting at the edge, her petite hands hanging between her legs as she made her even small body smaller. A familiar pose Talana had seen more than once when the protector of their group was studying a clue or preparing to spring into a flurry of deadly violence. With a sinking in the pit of her stomach, she realized this time she was the person Elizka’s knowing eyes were studying.

“Why are you out here when your siel eienaar waiting in your room?” Elizka’s blonde hair shone in the moonlight as she offered her hand.

Grasping it, she allowed Elizka to pull her from the pool and hand her the towel she’d draped over one of the chaise loungers. “Because Bryer is being difficult. He refuses to allow me to touch him, or even get close enough for my pheromones to work upon him. This Earthling male is very frustrating. “

“Odd, for the peacekeeper of our group, I’m finding this quite ironic. I say you place your lewe te verander around his throat. When the mark appears he won’t be able to protest your claim any longer. The collar has that effect on men. It makes them long for their Mistress’s commanding touch.”

Drying off briskly, she knew what Elizka was saying was true for the dieDonker but she wasn’t identifying with that side of the mating ritual. No, instead I have the irresistible urge to offer the mating collar to him, so he can collar me. As the middle point between the light and dark factions of her race, her sexuality could swing either way – dominant or submissive.

“You know the collar isn’t a guarantee of submission.” She wrapped her towel around her waist. The mark isn’t permanent until the siel eienaar crosses the final tier.”

“But it’s a start, “ Elizka insisted. “A man feels different once the collar is place.” She flexed her fingers, a look of anticipation in her eyes. “If you need help collaring him, I’m here to help.”

Wrapping the towel around her waist, she sighed. “It has to be freely given….”

As the word slipped pass her lips, Elizka stared at her. “Don’t you mean freely taken?”

Picking up her key card, Talana sighed. “No. I don’t.”

Understanding crossed Elizka’s face. “Ah, so you’ve gone to the way of the light.” She gave her shoulder a gentle squeeze. “Would you like me to have Ana come to you?” She asked mentioning the final member of their group.

She shook her head. “No, there’s no need to wake her, it’s late and she did most of the driving today. My bonding with Bryer can wait. I don’t foresee anything happening tonight.” Then she slipped back into the mating hostel. Entering the wing which had been assigned to her, she paused by the door, mentally girding her loins for her mate’s effect on her body. Once the chlorine cleared her sensitive nose, the mating heat which she’d been consumed by in his restaurant would return, this time sharper because of their close proximity.

Silently entering the darkened room, she heard the muffle grunts and groans coming from the bed. The tantalizing scents of ooit blom and donker blom were potent. She could barely make out the frantic movements of his arm. Her breath caught as her nipples hardened. Her mate had been trying to appease his desire.

“God damn it!” The sound of light clicking on had her squinting against the sudden brightness of the room. As her eyes adjusted, she almost fell to her knees. Laid out across the silk sheets, her mate was naked, his dark skin pearled with dots of semen. The fire in his green eyes hot. “What the hell did you do to me? This fucking thing won’t go down. No matter how many times I’ve come.” He gestured to the swollen shaft hovering over his stomach.

“It’s my pheromones…” She swayed dangerously.

His eyes narrowed. “You mean as long as I’m around you, I’m going to be rock hard?”

She licked her lower lip. “I tried to warn you, Bryer. A lust with no relief unless until you’re with your siel eienaar.”

He swung his legs off the bed, his nostrils flaring. “You mean to tell me until I fuck you into the bed, I’m going to be walking hard-on?” He stood up, mere inches from her. Her control broke. She fell to her knees, her face level his dripping cock. A cock she wanted to lick, suck and kiss until he was spilling down her throat, completing their bonding.

“Please, Bryer…” Her whispered plea must’ve worked because he cursed roundly before reaching for her, the scent of his desire washing over her.

Check out the rest of my peeps:

The AfterDark World with Ray Sostre

The Crypt of Morbius


©Dakota Trace All rights reserved. This is a work of fiction. All names, characters, locations, and incidents are products of the author’s imagination, or have been used fictionally. Any resemblance to actual persons living or dead, locales, or events is entirely coincidental. No portion of this work may be transmitted or reproduced in any form, or by any means, without permission in writing from the author.
Posted by Dakota Trace at 9:41 AM