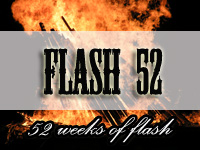 Time for another Flash 52!  This week, our tale is inspired by a a dark but sexy angel pictured below.  So take a dip into my world and check out where the picture led me.
Dakota

Flash 52 {6}: Obedience
Marie shifted against the plush upholstery of her seat in the opera box. Below on the stage floor, the performers attached to wires swept across the platform, their dark wings glimmering in the spotlight, while tightly muscled bodies gleamed with oil as they waged an epic battle complete with battle cries and clashes of swords. But even with all the muscled physiques cavorting on the stage, she found herself distracted. Of course she was, with her Master sitting next to her, his palm on the inside of her thigh, as he rubbed small circles against her skin.

“I bet you’d like to fuck them, wouldn’t you, slave?” The whispered question sent shivers up her spine. She nodded, not trusting her voice, or the fact that there were other patrons around them. The fingers dug slightly into her leg, the small flash of pain sending a fresh flood of desire through her. “That’s not an answer.”

“Yes, Master.” She said the two words softly but still loud enough to be heard. He moved closer, his free arm going across the back of her seat, while his lips nuzzled the shell of her ear. Another shiver of desire went down her spine as his tongue dipped inside briefly, before he pulled back enough to breathe against the wet flesh. 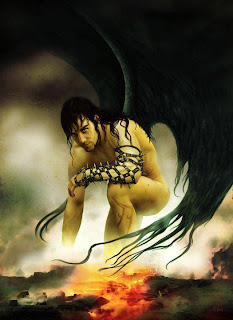 “Yes, what?” He nudged her into tipping her head to the side. “What would you like to do, slave? Lick the sweat off their bodies, kneel before them to suck their cocks, or would you even let them fuck you?” He slipped his hand a bit further up her thigh, the tips of his fingers brushing her bare mound. “I bet you’d do all that and beg for more, right?”

Her nipples pressed hard against her top, as her hips rolled up searching for contact with his fingers. “Yes, Master…if you wanted me to…” She bit her lower lip to keep from crying out as a sudden silent vibration rocked her. The small silver bullet he’d slipped inside her before they’d left home flared to life.

“Hmmm, I think someone likes the idea of being made to pleasure all those men down there. Would you like to be a center attraction, to have them blow their loads all over you?” His free hand guided her palm over the prominent bulge at the juncture of his thighs. Instinctively she curled her fingers around him, tugging the length of him until he was full and throbbing under her palm. “Just like it was at the last play party? The one we had for your birthday?”

“Master…” She gasped as the vibrations intensified, her mind filled with the memories of kneeling in the spotlight, surrounded by men, some Doms, some submissives, but all of them jerking on their cocks until they covered her with warm seed. Then in the midst of all of it, the voice of her Master – the man she’d given not only her heart to but her body, her soul, even the very fiber of her submission – praising her, telling her how beautiful she was and how much he loved her. And now she was sitting in this hoity-toity theater – a place that she’d frequented since her youth, with a man who’d never been to the theater in his life, allowing him to torment her.

“Wouldn’t these people be surprised if I ordered you to strip right here and join them on the stage?” He tugged her lobe into his mouth. She knew to the average person it looked like he was trying to steal a kiss, but her Master was more devious than that. This was her punishment, her reward, hell it was her fate - if a person wanted to be philosophical.

“Yes, Master.” She turned her head, muffling her groan against his shoulder as his thumb found her clit. Rubbing over the slippery nub, he pushed her closer to the edge.

“Hmmm, I’d love to be that evil, but…” he lifted her face to his. “I’d rather make you come right here, right now.” He pressed harder against her, keeping her balanced on the edge of release. She panted, her body readying for her climax. She muffled her protest when his fingers suddenly abandoned her, and the vibrations of the silver bullet inside her stopped. “Go to the restroom, now slave. Wait for me. Keep yourself on the edge but don’t come.”

“Master?” She looked up, her eyes meeting his. The command in their depths assured her he wouldn’t ask again. Standing on trembling legs, she moved out of the opera box, and down the hall towards the women’s restroom.

As she entered the powder room, she wanted to groan as she saw the attendant sitting on the small sofa in the waiting area. Sensing a fly in the ointment so to speak, she worried her lower lip with her teeth. If Master came into the bathroom, he was likely to take her in front of the attendant with a total disregard of the woman’s outrage. While the idea of it was tempting – she’d love to thumb her nose at the uptight world where she’d grown up, it would probably be best if she did get rid of the woman.

“Excuse me, Miss –“ she nearly faltered as the bullet inside of her flared to life once more. “I was wondering if you might be able to fetch me some seltzer water?” She pressed her palm against her stomach. “Suddenly, I don’t feel all that well.”

The attendant looked sympathetic as she rose. “Here sit down, ma’am, and I’ll be happy to fetch it for you.” As soon as the door closed behind her, it opened again and in strode Master, looking so elegant in his tuxedo. It wasn’t a sight she was used to, but one she could drool over. He was sleek like a tiger stalking his prey, and as he flipped the lock on the bathroom door, she knew she was it.

“Spread them.” His order had her parting her thighs without a thought, exposing not only the top of her stockings but also her bare mound. He dropped to his knees between her legs, one hand tugging on the loop holding the bullet in place. “So wet.” He growled against her skin, the sound of his zipper loud. “Need you.”

She cried out softly, as he replaced the bullet with his thick cock, sinking deep inside of her. “Master!”

“My slave.” He hissed, his hips starting a fast hard rhythm against hers. The brutal pace shoved her hard against the wall and caused the settee to thump. Clinging to his shoulders, she wrapped her legs around his waist, praying she could last until he came. She was never allowed to come first. She had to wait. “Son of a…. I can’t wait. Come.” His order came out raw. “I need to feel you come before she gets back.”

His command had her flying over the edge, the pleasure sharp and brutal. “Master!” She groaned holding on to him tightly, as he muffled his own shout against her shoulder. Sometimes she wondered who was Master and who was slave, but as he pulled back a satisfied expression on his handsome face, she knew. She was his.


©Dakota Trace All rights reserved. This is a work of fiction. All names, characters, locations, and incidents are products of the author’s imagination, or have been used fictionally. Any resemblance to actual persons living or dead, locales, or events is entirely coincidental. No portion of this work may be transmitted or reproduced in any form, or by any means, without permission in writing.
Posted by Dakota Trace at 11:34 AM