Happy Easter Folks!  This week I bring you an unedited snippet from the next book in my Wolfen Prophesies Series.  Her Wolfen Claiming is the tale of Emma's daughter. The eldest of her twins, Colleen.  Below is the blurb about this upcoming book along with an unedited snippet out of Chapter One.  I hope you enjoy and don't forget to stop back HERE for other contributors.
Blurb: 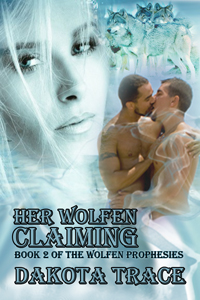 Matthais Galloway has just taken over the MacDonald clan by order of the High Council.  He's the eighth alpha in the past 100 years to take charge since the death of the Great MacDonald. The council is tired of the constant power struggle within the MacDonald clan, and have tasked Matthais to to bring peace to the clan or face death.  To rule though he has to have a mate. After getting permission to claim his best friend, Andrew Gilchrist, he's just finished the process of claiming his lover as his beta when both men realize there is a third mate in their bond - and without him, their bond will never be complete. Following the bond, they cross the sea expecting to find another man. But what they got was Colleen Donghall, the long lost daughter of the prophesy.  Now they have to convince the skittish lass that her place as at their sides and in their bed even as the predicted war erupts around them.

Snippet:
On the Eve of Lunar Eclipse - 2000
“Dammit, Andrew! You act like I have a choice in this matter.”  Matthias Galloway grabbed at his long-time lover’s arm.  Andrew Gilchrist was hot headed as they came and now was no exception.  Not that he didn’t love Andy’s fire – it was just inconvenient at times. Like now.  They’d just left the chambers of the High Council, where Matthias had been called upon to accept the mantle of Alpha to the struggling MacDonald clan.
Since the death of the former alpha nearly a hundred years ago and the unknown whereabouts of his daughter, his rightful heir, there had been seven different men and women who had assumed the position, only to be rejected by the pack. And if I accept what the council is offering I will be the eighth. The only catch is I have to mate. Now I just have to convince Andy I only want him at my side – not some woman.   “The council said I had to mate to assume the position of Alpha, not that my mate had to be a woman.”
“Whatever, dude. We both know that there has to be an Alpha female.”  Andy’s normally lilting voice was rougher than usual – a testament to his anger. Jerking his arm free, his lover of the past three and a half decades shifted, his timber wolf scampering down the hall, leaving a pile of shredded clothing in his wake.  Cursing under his breath at Andy’s temper tantrum, he wondered if he should let his lover cool down, or drag him back to their room by the scruff of his neck. As the dominant male in their relationship he easily could but in the state that his lover was in, he’d probably get mauled in the process.
Rubbing the back of his neck, he watched as Andy disappeared around the corner. His shoulders slumped as he turned to look at the closed chamber doors.  The elders will have screwed him over royally if they refused his request to take his lover as his mate.  Dropping his hand, he gathered up what remained of Andy’s clothing before making the trek up to the room which the High Council had assigned to him for his stay.
The decision the Council was debating weighed heavily on him. He wanted no other and was willing to fight for his right to keep Andy. They weren’t the first bisexual couple in Wolfen History, even if it had been years since they’d invited a female into their bed. Surely the Council would agree to his request. They have to because I won't give him up even for the position of Alpha. I love him.
He unlocked the door to their room, before pocketing the key.  Setting the clothing on the dresser, he crossed to the ceiling high windows. The drapes had been parted to catch the glimpse of the setting sun. Just outside of the window, he watched as a wolf – perhaps Andy, from this distance he couldn’t tell – dart into the darkening woods.  He longed to be with him, hating the distance the other man was placing between them.
Posted by Dakota Trace at 11:53 AM