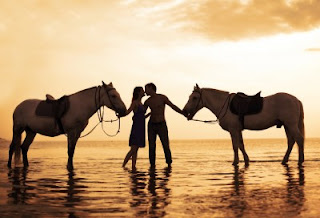 The Wave
The sun was setting as I walked along the shallows – the waves washing over my bare feet as I led my horse by its bridle. So far my vacation had been a beautiful vacation – one I had desperately needed after my break-up. I’d thought Adam was a perfect lover – one who was considerate both in and out of bed. Until I found out he was that way with every woman, including both of his mistresses.  The three-timing bastard!  So I’d taken the tickets for our Australian honeymoon and gone alone. Served the asshole right, I don’t feel the least bit guilty. Grams was right, a little R and R is exactly what I needed.
The sound of another horse approaching drew my head up. A tall dark-haired man, wearing nothing but a pair of cuffed white khaki’s was coming from the other direction, leading his horse too. I smiled in passing as our paths crossed. His baby-blues were captivating and all that luscious dark skin over bulging muscles tempted me to touch. I was imagining how he’d react if I knocked him to the sand to explore his body, when it happened. A large cold wave crashed into me, taking me by surprise. Chaos ensued as my gentle mare reared up on her hind legs, jerking the bridle free of my hand.  With a thud, I went down on my butt onto the sand as the wave retreated then another washed over my head.
Sputtering, I scrambled to my knees, my wet hair in my face, obscuring my vision.  By the time I pushed the clinging mass from my eyes, a large callused hand appeared.
“Are you okay, Sheila?”
His thick Aussie accent sent delicious vibes straight to my womb.  This was another reason why I’d come down under. All those damned sexy Aussie accents.
“Yeah, I think so.” Taking his offered hand, I allowed him to pull me up.  “Thanks. I was woolgathering and didn’t realize the tide was coming in.”
He smiled showing off a great set of slightly crooked teeth. “I’m just glad I was here to help ya.”
“Me too.”  Heat filled my face as he continued to stare at me. “What? Do I have seaweed on my face?”
He shook his head. “It’s like I’ve met you somewhere before…and I swear it’s not a line.”
Looking down at our joined hands, I said the first thing that came to my mind. “It’s like déjà vu…”
“…all over again. My name is Aidan Sanders, what’s yours?”
I licked my lips as his name rang a bell. I’d met him briefly when I’d checked in yesterday. He was the owner of the villa I was staying in. “Allision. It’s nice to meet you again.”
“Yes, it is.” He smiled, tugging me away from the edge of the beach.  I willingly followed. I didn’t wonder where he was leading me – I just knew I felt alive again and I was ready for a new adventure.
Posted by Dakota Trace at 11:50 PM