So this week we're supposed to take a snippet from one of our books about a hero or heroine that doesn't realize how attractive he or she might be, but still take a chance. In one of my books from Eirelander Press, Always the Bridesmaid, my heroine Jenna has always been the larger than average Midwest girl and always been elected to the bridesmaid at her various family member's wedding because she's such a dependable and sensible girl.  Well to say she's fed up with it is an understatement and she acts completely out of character when she meets the groomsman she's been paired with.  Enjoy. And be sure to stop by the rest of the peeps blogs.  :)

But the pitying looks from each of the other bridesmaids as they passed assured her that almost everyone had the same opinion on the matter: Dawson’s. Thankfully, she had a healthy dose of her father’s pride and was able to hold her head up in the face of adversity. In fact, to hell with what everybody thinks. I’m going to find a man who wants me, plus size body and all. It’s time this nice girl takes what she wants for once. My days of pleasing everyone but me are over. Who knows, maybe I’ll even rub it in Dawson’s face to boot.

“I take it you’re my date for the evening?” A deep masculine voice washed over her from several inches above. A gasp of pleasure escaped her when she had to tilt her head back to see his face. He must’ve joined the recessional while she’d been lost in her thoughts. Her eyes met his. He has the most amazing blue eyes I’ve ever seen and he’s taller than me. Please, let him be my missing groomsman!

“I’m Noah. Sorry I’m late. My flight from Brazil was delayed, but if I’d known such a beautiful woman was waiting for me, I would’ve rushed.”

The sincerity reflecting in his eyes surprised her. While she had no doubt he was sorry for being late, she hadn’t expected a compliment. Uncertain on how to proceed she ignored his later words to focus on his apology. “Don’t worry about being late. It’s not like you had any control over your flight. Besides it’s better late than never.” She forced a quick smile to her face. “I was worried I took those blessed dance classes for nothing. After all it’s hard to do the Salsa without a partner.” A thought occurred to her. “You do know how to do the Salsa, right?”

He threw back his head and laughed before nodding. “Speak your mind often?”

“No, but I decided to turn over a new leaf. No better time like the present.” She mentally swore as her face heated.

He chuckled once more. “You are such a delight. Shall we?” 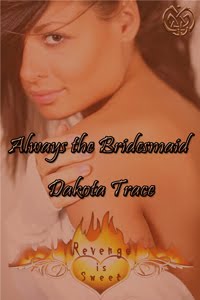 She’s been burned, and he’s going to help her get revenge.

BUY FROM AMAZON
BUY FROM BARNES AND NOBLE

©Dakota Trace All rights reserved. This is a work of fiction. All names, characters, locations, and incidents are products of the author’s imagination, or have been used fictionally. Any resemblance to actual persons living or dead, locales, or events is entirely coincidental. No portion of this work may be transmitted or reproduced in any form, or by any means, without permission in writing from the author.
Posted by Dakota Trace at 9:36 AM