#MySexySaturday {37} How sexy is a man who loves a child?

So this week, we're supposed to be talking about kisses.  And while I have plenty of sexy kisses in my current WIP, Healing Hark, there is one kiss that stands out in my mind. It's fairly early in the book, but it shows for the first time, Hark's softer side with his god-daughter, Sophia. What can be sexier than a man who adores a child? 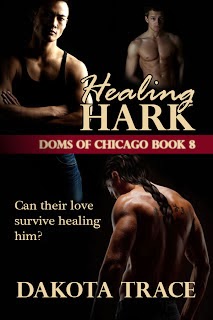 Excerpt:
Set-up: Hark has been conned into staying for dinner with his neighbors - Gabriel, Zhenya and their daughter, Sophia. (who just happens to be 9-10 months old)  Enjoy!

Gabriel chuckled. “It's called Mommy-radar, dude.” His gray eyes twinkled. “I swear she has eyes in the back of her head and an extra pair of ears. Sophia can't get away with anything.” He stirred the pot of sauce. “Probably a good thing too, since she started crawling. I swear she's into everything.”

Hark laughed. “I remember that age. Alex was lightning fast. More than once I saved his little ass from a serious tumble when he tried to climb out of his crib or down the steps.” His grin faded. “Damn I miss him. It’s hard to believe it’s been nearly three years since they died.”

Gabriel clapped a hand over his shoulder, squeezing it gently. “I understand. I miss them too. But life goes on and they’d want you to be happy. You can’t mourn forever.”

The tense moment was interrupted when Zhenya brought Sophia back down the hall. “Look who's up, Daddy.” The little girl cooed, looking delightfully rumpled with her tousled dark curls tumbling around pink cheeks. As usual, she smelled of baby powder and was all grins and drool. His heart leapt when she spotted him.

“Unca.” Her little pudgy hands reached for him as she squirmed to get free. “Unca.”

Stepping closer, he took her from her mother. “Hello, sweetheart. Did you have a good nap?” He pressed a kiss to her forehead.

She giggled, her little fingers reaching for the long braid that had fallen forward when he'd leaned in to take her from Zhenya. He hid his wince as she pulled on it, brushing the end against her cheeks. He chuckled, lifting her high enough to set her on his shoulders. At ten months of age, she wasn't very heavy, but loved when he hoisted her high. Another round of giggles escaped her. “Unca, unca,” she chortled.