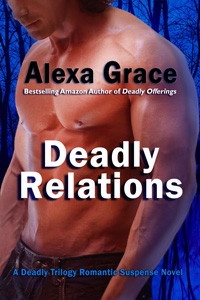 In Deadly Relations, a serial killer of young women hides in plain sight in a quiet county in the Midwest. He hides behind a friendly face that inspires trust, a personality that is charming and persuasive — and has a rage to kill he can't control. Detective Jennifer Brennan, still haunted by her abduction five years before, devotes her life to serve and protect others. So when three young women go missing and are found murdered on her watch, she vows to find the killer — or die trying. A personal relationship with her partner, Detective Blake Stone, would be violating the strictest of the department's unspoken rules and career suicide, especially since she is the sheriff's daughter. But the connection Jennifer has with her partner, Blake Stone, is nothing short of electric. Working with him daily and denying her attraction is hard. But when he moves in to protect her, it becomes unbearable. As they fight temptation, two detectives race against time to find the killer before he strikes again. It is the most important case of their careers. It could be their last.

Catherine Thomas awoke from a drugged sleep with every bone in her body aflame. Breathing in and out triggered a torturous throbbing in her head.

She wanted her mom. Though in her early twenties, Catherine had always needed her mother most when she felt ill. Though she rarely got sick, she knew something was very wrong.

She shivered as the cold seeped into her consciousness. Why was she freezing? Where were her blankets? Catherine tried to move her legs but they seemed frozen in place. She attempted to stretch her arms, but couldn’t. Her eyelids felt heavy and swollen and she feared the pain that would accompany opening her eyes to the light. But she had to find her mom. Catherine slowly opened her eyes to inky blackness. Was it night time? Her facial muscles flexed involuntarily and she realized something was tied around her eyes. It was then she remembered.

She and Nicholas had had another fight. This one was a doozy, and she’d slapped him, leaving an ugly red mark across his jaw. Though he hadn’t admitted it, she knew he was seeing someone else. He’d been distant and his usual insatiable desire for sex had diminished so much it was practically nonexistent. There was someone else, and he didn’t have the balls to tell her.

Consumed with anger, Catherine had rushed out of his house and drove home to change clothes to go for a run. Running had become her salvation. She ran when she needed to think or to drive away her demons.

She’d changed into her running clothes and was pocketing her keys and cell phone when her dad appeared in the hallway. Catherine remembered smiling at him. For a second, she’d been tempted to throw herself into his arms for one of his special bear hugs. But, instead she’d hurried to her car so she could make the most of the remaining light of day.

Catherine’s original plan was to run at the high school track like she usually did, but once she got there and saw the number of people running, she’d changed her mind. She’d needed some alone time, so she’d backed her Honda Civic out of the lot and headed toward Deer Run State Park ten miles away. If she hurried, she could get her exercise done before the park closed at nightfall. She’d feel better about her fight with Nicholas. Running made her feel better about everything.

Once inside the park, Catherine had studied a sign that listed each trail and the degree of ruggedness. She’d chosen trail number ten, which was advertised as moderately rugged and would give her a good workout. Maneuvering between several groups of people leaving the park, she’d reached her trail and started out in a jog on the narrow, dirt path. Catherine noticed few people on the trail, and that was fine with her. She valued her alone time and concentrated on the exercise.

Catherine hadn’t gone far when she reached a wooden platform built over a deep ravine. Peering over the railing, she saw the river surging below and a deer drinking on its bank. She continued down the trail, alternating between jogging and walking, depending on the terrain. It was unseasonably warm for March, and the scent of the tall pine trees and ferns filled her senses. Catherine was calming. With or without Nicholas, she was going to be okay. She was stronger than she gave herself credit for. Who needed Nicholas? She’d go to the Police Academy in eleven months and start the career of which she’d always dreamed.

Catherine slipped as she made the descent to what the park labeled as the “Ice Cave.” She slid a few feet on her bottom, but was able to stop herself by grabbing a sapling. Pulling herself up, she assessed her injuries to be just some scratches and scrapes on the back of her legs.

Her senses went on alert. Catherine felt as if someone were watching her, but when her eyes scanned the wooded area, she saw nothing. She continued on the path down the hill.

Once she’d reached the sandy bottom, she stood before the Ice Cave. A twig snapped. Spinning around, trying to spot any danger, she heard the crackling of dry undergrowth with each step as someone approached nearby. Was someone following her? Catherine launched herself into the next section of the trail, cursing herself for being so angry with Nicholas that she lost all thoughts of personal safety. When she hiked, she always had her small stun gun and a pocket knife with her. Sticking her hands in the pockets of her sweatpants, she felt only her cell phone and keys. She turned her cell phone on only to find there was no signal. Damn. She turned if off again and shoved it back in her pocket.

Catherine pushed on as the path wound around a steep hill. On one side of her was a thick forest of trees and vegetation, on the other was a slope that led to the rushing creek below. She stopped frequently to look back, but saw nothing. Figuring she was at the half-way point of the trail, she pushed forward and prayed she’d make good time getting to the end.

The sun was waning in the horizon in hues of orange, pink and red. Daylight was running out, and she quickened her pace as she brushed a spider’s web from her face. The crunch of brittle leaves and twigs behind her continued, but each time she searched the thicket of woods, she saw dark shadows sheathing the trees as the light diminished — but no humans in sight.

Turning a bend, Catherine lost her footing again and tumbled down the descent of the dirt path. She crashed face-down to the bottom of the slope, knocking the wind out of her. She lay on her stomach for a short while as she sucked in air to fill her lungs.

Catherine felt him nearby, rather than saw him. She rolled over and looked up at him. She recognized him. Thank God. She’d seen him at the cafe. Catherine smiled at him as he offered his hand to help her up. Grasping his hand, she pulled herself up and was about to thank him for his help when he swung her around, slamming her body against his, gripping her in place with his left arm locked around her neck. Catherine’s eyes widened in terror as she noticed the hypodermic needle in his right hand. An explosion of pain rocked throughout her body. Her world went to black as he plunged it in her neck.

Her heart slammed against her ribs with the memory. Where was she? She tried to move her arms and legs again, but it was impossible. The effort to move caused the structure she was lying on to creak and rock. Catherine moved her fingers to scratch at the surface and realized she was secured on a long, wooden table. He had her strapped to a wooden table, with a dark blindfold stretched across her eyes! She couldn’t move. She couldn’t see. What was he going to do to her? A primal scream started in the depths of her chest and rushed through her throat until she discovered her mouth had been sealed shut with tape, muffling the scream into a moan.


ABOUT the AUTHOR
Alexa's journey started in March 2011 when the Sr. Director of Training & Development position she'd held for thirteen years was eliminated. A door closed but another one opened. She finally had the time to pursue her childhood dream of writing books. Her focus is now on writing riveting romantic suspense novels.

You can visit her at - http://www.alexa-grace.net/


I loved reading the conclusion of this trilogy. Just as the first two books in this series, the plot took center stage as Jennifer and Blake hunted down a serial killer.  I loved the fast paced action of this book, even as our hero/heroine attempted to resist the chemistry brewing between them.  It was great to also revisit old characters in this book, like Jennifer's father - the sheriff, but more importantly I was happy to see Jennifer thriving after what had occurred to her in the last book.  (but I'm not going to spill on that count. You'll have to read Deadly Deception for that.)  All in all, I'd say this book was a great follow up to the second and greatly enjoyed reading it - so much that I read it in one sitting. Kudos Ms. Grace :D