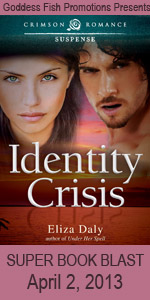 Today I have the pleasure of telling you about Eliza Daly's new release, Identity Crisis. Not only have I added this book to my TBR pile but I'm happy to say, Ms. Daly is being very generous and has several prizes she's giving away during this tour. So be sure to follow each stop.  She's giving away  a not only a $20 Amazon or B & N gift certificate  to one randomly drawn commenter but she's also giving away 4 - $10 Amazon or B & N  gift certificates to randomly drawn commenters during the tour.  So be sure to comment!  With that being said, lets get on to the good stuff. The book and the super suspenseful excerpt!

BLURB:
When Olivia Doyle’s father dies under suspicious circumstances, rather than inheriting a family fortune, she inherits a new identity. She learns they were placed in the Federal Witness Protection Program when she was five years old. Her father was involved in an art forgery ring and testified against the mob. Brought up not to trust anyone, Olivia has a difficult time relying on U.S. Marshal Ethan Ryder to protect her, and to keep her secret. She fears her father may have continued his life of crime through her art gallery. She has little choice but to depend on Ethan when she realizes someone is now after her. Olivia’s search for the truth leads her and Ethan across country to a family and past she doesn’t remember.

At the age of ten, Ethan witnessed a brutal murder. He vowed when he grew up, he’d protect people in danger. Protecting Olivia is difficult when she won’t trust him. He soon realizes his desire to protect her goes beyond doing his job, but if his judgment becomes clouded by emotions, her safety could be jeopardized.

Can Ethan and Olivia learn to trust each other when they uncover secrets that will change their lives forever? 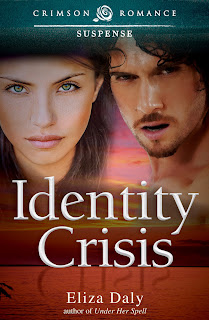 EXCERPT:
The footsteps drew closer. Her breathing quickened. The intruder paused outside the door and she held her breath, a death grip on the pepper spray. The barrel of a gun appeared through the doorway, followed by a man. In that split second, she blasted him with a steady stream.

“Shit!” he yelled, snapping his head away from the line of fire.

Unsure if she’d made a direct hit, she flew past him, still spraying the air behind her. Although it wasn’t a blanket mist, she couldn’t help but inhale some of the toxic vapors in the air. Her eyes burned slightly and she coughed, racing down the hallway and across the open foyer.

She was almost to the door when the guy yelled out in a raspy voice, “Touch that door handle and I’ll shoot it off.”

She came to a screeching halt, unsure if he planned on aiming for the handle or her hand. The blood pulsating in her ears muffled the roar of the lawn mower as it passed by near a window. Nobody would hear her scream. She eyed the security alarm keypad on the wall by the door. Two quick steps and she could hit the panic button. Two quick steps and she might get shot. She slowly turned around, her gaze locking on the gun pointed at her from the opposite side of the foyer. Sheer panic pressed against her chest, and she sucked in a deep breath.

The guy cleared his throat. “I’m not gonna hurt you.” He cautiously lowered the gun, but didn’t holster it. “Unless you spray that crap again.” He blinked rapidly and ran a hand up over the top of his head, sweeping back a clump of wet hair. Her aim had obviously been off. It was impossible to spray straight when her body was shaking uncontrollably.

The guy’s dark hair was just shy of touching his shoulders and he had a five o’clock shadow. A black T-shirt covered his broad chest and faded, relaxed fitting jeans contradicted his rigid stance. A scar across his cheekbone, and a thin one slashing his eyebrow, added to his don’t mess with me look.

“I’m Ethan Ryder with the U.S. Marshals.” The man flashed a badge, then slipped it back in his pants’ pocket.

If the mob had hunted down her dad, who was to say it hadn’t been through a U.S. Marshal snitch? He’d trusted Roy Howard, not Ethan Ryder. Maybe he wasn’t even with the U.S. Marshals. Rather coincidental that he showed up right after a robbery.

At the back of her mind she heard her dad’s voice. Don’t trust him, Livvy. Be leery of people you know and certainly don’t trust someone you don’t know.

AUTHOR BIO:
Eliza Daly’s first attempt at creative writing was in fourth grade. She and her friends were huge Charlie’s Angels fans and she would sit in her bedroom at night writing scripts for them to act out at recess the following day. She was Kelly Garrett. Fast forward to the present, she’s still writing stories about beautiful women who always get their men. The journey from fourth grade script writer to published author wasn’t an easy one, but it was always an adventure and the final destination was well worth it.

When Eliza isn’t traveling for her job as an event planner, or tracing her ancestry roots through Ireland, she’s at home in Milwaukee working on her next novel, bouncing ideas off her husband Mark, and her cats Quigley, Frankie, and Sammy.