I've recently had the pleasure of reviewing this wonderful book by a new author to me, so be sure to check out the review at the end of the post :D  With that being said welcome A.C. Mason to A Little Bit of Naughty 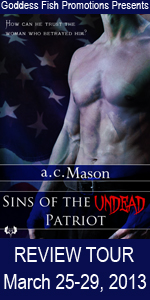 To save the President, Vaihan must trust the woman who betrayed him.

Vaihan Louchian, Ancient Zombie and Special Advisor to the President, dabbles in contracts for Homeland Security in Washington DC, the only remaining demilitarized zone. His latest mission: to seduce delectable Leera Waltz so he can take down her boyfriend Rowley, leader of the anti-zombie terrorist movement. Vaihan and the President work the Bill of Undead Rights through the Senate, but terrorist attacks rise. The futures of the living and undead are in jeopardy, and Ms. Waltz is not all she seems. Vaihan can’t help being more interested in rescuing her than in his assignment. Any human female who’s willing to put up with the complications of lovemaking with him and his bouts of OCD is worth the hassle.

Vaihan is powerful, intelligent and kind. So not what Leera expected of an undead. When she’s forced to betray Vaihan, she knows he will never understand. She must return to Rowley, and slips deeper into the city’s dark underworld. Then Vaihan’s suspected in an assassination attempt against the President, and Leera has to find the courage to do what’s right and save him, or lose not only Vaihan and the leader of the free world, but her heart and soul.

WARNING: Questionable sexual situations that will disturb some readers, such as abuse, bondage and drug use. Graphic violence and sex, including taboo play. M/F. M/F/M. M/M. And the sexiest undead civil servant you’ll ever meet.

Temptation filled the dark lounge--half-clad human females danced in the center prancing for the zombies, who circled this evening’s “dishes.” Jaw clenched, Vaihan gripped his glass with a shaky hand. Sure, the government provided his kind cloned meat, but taste didn’t factor in. “I can’t believe it’s cloned human” was false advertising.

A petite blonde glanced his way for the third time and smiled. As she ground her hips to the rhythm of the music, her purple, skintight minidress hiked up her thighs.

He lifted the Lagavulin Scotch with an ounce of pureed organs mix to his lips and downed the contents to quiet the ache at the pit of his stomach. The smoky peat-and-metallic flavor of the dense liquid coated his tongue. Such concoctions helped keep the cravings at bay. However, the elixir only curbed the urge to taste flesh temporarily. The mouthwatering aroma of healthy humans permeated each breath, waking the “urge.”

He slammed his glass down on the bar and headed for the door. It wasn’t easy to be The Undead Poster Boy, when he too, struggled to keep his other needs caged.

The blonde stepped in his path. “Leaving?” Between the mounds of breasts, her cleavage was a deep gorge. She curled her lips upward on one side in what she likely hoped was a seductive smile.

“I’m stepping out a moment.” If she was legal, he’d guess barely. Not worth the risk. Not after every sacrifice he’d made the past thirty years.

“My place or yours?” Need beamed at him in her green eyes. Blue LED lights ran in tubes on the ceiling, flooding her youthful flesh. The bass of trance music thumped at the rate of a victim’s heartbeat when panic set in. An undead never tamed the predator inside.

“Neither.” Tonight she’d find a fix, but not from him. Others of his kind enjoyed toying with their food. He found such activities distasteful, so these types of clubs weren’t his scene. In the corner, a zombie licked a brunette’s neck and slid his hand up her skirt. Tasting the living didn’t hurt, but left an undead in a state much like blue balls. Her lips parted in a gasp as she rested her head on the wall behind her. An addict, no doubt.

“You sure?” The blonde leaned into Vaihan, pressing herself to his crotch.

Heat from her hip stroked his length, rousing suppressed need. He huffed. Maybe some were more easily swayed. He stepped back.

With wide eyes, she glanced up. “Holy Mother of God, and you’re not even hard.”

“Correct.” Clueless would understate her aptitude. The human females in this bar had no clue what they were getting themselves into. So many tasty treats were scattered about the room offering themselves up for a hit of Z-Luv, the neurotoxin zombies produced in their saliva, blood and semen, which paralyzed their victims in a state of pleasure until the feeding began. In this place, even the oldest of Ancient undead would suffer. Once a human was hooked, they spiraled out of control, losing their appeal. He enjoyed a more responsive lover in and out of bed rather than one half-baked out of her mind.

Perhaps he should show her. 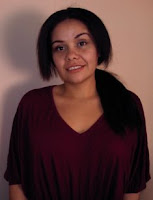 Born from the union of her Scottish and Belgian mother and an African American and Cherokee father, a.c.Mason’s youth was filled with dichotomies and moving from place to place. She developed a curiosity to explore through writing the seedy side of our nature and desires. Add to that her fascination with theology, politics, history, horror, and erotica. And voila, her distinct voice surfaced. Given her own diverse background, she writes stories that represent the world she grew up in. She enjoys delving into the realms of the unknown and blurring the caution lines. Her stories are the place where darkness meets human desire and fairytales endings are not promised but earned.

She is fluent in French and English. She’s an avid traveler, including most of Canada, both of the United States seaboards, England and Europe. For the past nine years of her life, she has worked with one foot in the past spanning from 18th century, the Bering Strait theory to modern day and now late Victorian and WWII. She advocates the preservation of our natural and cultural riches for future generations.

Take a journey with her characters and come face to face with what lays beneath their illusions. Emerge…on the other side changed.

I personally found this book to be quite enjoyable even with its dark side and dash of taboo-ness.  This book grabbed my by the throat and I had to finish it all in one sitting.  The world this author has created is wonderful.  I loved the hero, Viahan.  Not only is a kick ass predator  he's also a knight in shining armor whose quirks had me smiling. I loved his OCD, it made him seem a bit more human in my eyes even though he's a zombie   Ms. Mason did a wonderful job of creating a different view of zombies than those mindless, hunger driven horror objects.  I also greatly enjoyed Leera.  I loved the layers Ms. Mason used creating her.  In short this book had it all for me.  Steamy sex, a fast paced plot and plenty of shifty dealings between the different government agencies, bad guys, and our hero/heroine. This is a book I definitely recommend to those who love suspense with an erotic twist.  I will be looking for more from this author.

©Dakota Trace All rights reserved. This is a work of fiction. All names, characters, locations, and incidents are products of the author’s imagination, or have been used fictionally. Any resemblance to actual persons living or dead, locales, or events is entirely coincidental. No portion of this work may be transmitted or reproduced in any form, or by any means, without permission in writing from the author.
Posted by Dakota Trace at 1:18 PM

Email ThisBlogThis!Share to TwitterShare to FacebookShare to Pinterest
Labels: Book Tour, Sinso of the Undead