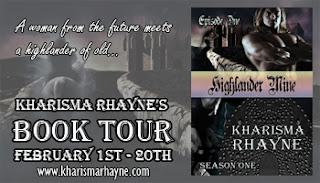 Thanks so much for allowing me to snag a spot on your blog for a little overtaking with some Highlander yumminess.

Episode 3 sees Breandan meeting Auralee and makes us question if he’ll ever accept that magic is real. Did Auralee really come from the future? I hope you’ll take a look below and catch a small excerpt.
Don’t forget, if you visit all the stops on the tour, some do have giveaways of the episodes.
I hope you’ll join me…along with Breandan, Auralee and their friends on their journey. 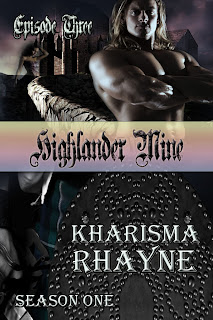 Auralee glanced at the landscape the entire way back to their keep, which she thought was more like a castle. It was beautiful. So much destruction and modernizing had been done to the Scotland she visited in 2012. This Scotland was pure. Well, if you didn’t include all the bloodshed.

It even smelled fresh.

As they went along, she rode with Drostan, who seemed none too pleased with sharing his horse with her. They rode behind Breandan, which gave her the opportunity to check him out. He was tall. She had thought Galen tall, but this Highlander was at least six foot seven. He was thicker and more confident. His long blond hair was down to almost his waist and he had two small braids. One on each side of his face, with the back flying free. Breandan’s blue eyes were magnificent. Clear, yet sparkly. Brilliant.

Perhaps trying to win him over wouldn’t be such a hardship on her part after all. Too bad she couldn’t thank the old woman for her meddling.

When they arrived, Torradan let out a call to the gate watcher. Was that what they were called? Auralee smiled to herself at her thoughts. She would get to write history while living in the midst of her research. Maybe there was a way she could get it to someone in the future.

On the way to the large gates, there were numerous small homes placed here and there for miles. Upon entering the gates, there were towers and the main castle. Other buildings and storage places. The castle itself was at least six stories. It looked to be very well build, although rather dark in appearance. It was obvious that those living there and those caring for it, took pride in having a clean place. So much for all things historic being dirty.

People ran up to them to greet the warriors on another victory. She listened as some older man spoke with Breandan and patted his back as he got off his horse. As they noticed her, they all gave her odd looks. Her clothes, she guessed.

“That’s Breandan’s father, Niall. The elderly man with him is Angus.” Torradan explained as though he could read her thoughts. “Angus has long predicted your arrival to Niall, who puts complete faith in the old Druid. Breandan wasn’t convinced. He doesn’t believe in magic. He’ll think of another way to explain your odd clothing.”

“What about you. Did you think Angus would be correct?”

“It didn’t matter; it wasn’t supposed to have any bearing on me at all. If you showed up.” Drostan shrugged. “You were Breandan’s. However, now I find you with me while Breandan tries to ignore you.”

Angus turned and smiled as he looked up at Auralee on the horse. Faster than she thought he’d be able to walk, he was at their side.

“I’ve waited many years for you, lass. Why are you riding with Drostan?” Angus took her hand and placed a kiss on it, while shooting a displeased look at Breandan.

“It’s just where I ended up. So, you know how I got here?” Auralee watched the old man nod. “And you know why I’m supposed to be here?” She saw the smile flash across his face and as he nodded again. “Can you help me get back?” That was it. His smile was gone.

“Lass, you can’t go back. You belong here. Breandan needs you. We need you.” The elderly man eyed Drostan. “Why did ye not insist she ride with her betrothed?”

Drostan shrugged and rolled his eyes. Angus knew that when Breandan made up his mind, it’s just the way it was. No matter what anyone else thought or said. Arguing was pointless.

“He doesn’t seem interested. So, I’m not much help if I fail. I should simply go home.” Auralee was matter-of-fact. “Betrothed? He doesn’t know me; I can’t be betrothed to him. Isn’t there some ceremony and doesn’t he have to ask?”

“Betrothed? Yes, it’s fitting and Niall and I will tell him later. I know who you are, lass, even if he doubts me. Nothing worth anything ever comes easy. You’ll see in time. He’ll be interested. Breandan’s just going to be difficult.” With that, she watched Angus walk back over to Niall.

She was at Drostan’s mercy as Breandan still hadn’t seen fit to even look her way. So much for her knight in shining armor. Or was that sword bearing Highlander with flowing kilt?

Be sure to check HERE and visit all the blogs on this tour for neat details.
Also, be sure to stop by my site (HERE) for a change to win the complete Season 1 of Highlander Mine.
Pick up episode 3 at ARe – Amazon – Barnes & Noble
Posted by Dakota Trace at 3:00 AM