Men and Women of the Military Blog Hop 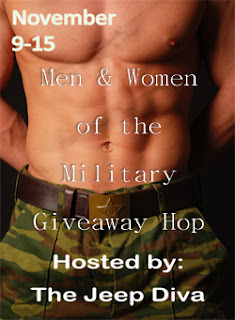 With Veteran's Day coming up  this Tuesday, I've decided to take the time to reflect upon what that means.  While I'm not from a currently active military family, I do have the history.  Both my grandfathers served in WWII, several of my uncles served as well, along with my father who served during Vietnam.  To say it's in our blood isn't a far stretch. I even married a man who'd spent several years in the Army, which included a tour of Iraq during Desert Shield and Desert Storm.  So it's no surprise that I have given into the temptation to write a story featuring men in the Armed Services.  In fact my popular Doms of Chicago have several men who served as Rangers, but retired from the service and started their own security service.   But when it comes to men in uniform I'd have to say the soldier that captured my heart and my imagination has to be Jacob.  He was a Tuskegee Airman during the Second World War.  Below is the blurb, for this book. (Warning: this is a historical m/m book featuring a hot pilot and a sexy Okinawan.) 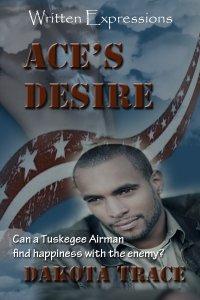 Blurb:
Hours after being promoted, ‘in the closet’ fighter pilot, Lt. Junior Grade Jacob “Ace” Gordy’s luck has run out. No, his teammates didn’t find out he was gay, but having his Grumman Hellcat crash down over Okinawa after the end of WWII wasn’t the accolades he’d hoped for when he accepted his new commission as part of the Tuskegee Airmen. Now he’s alone and wounded in a remote area of Okinawa during the middle of monsoon season, without an inkling of when or even if a rescue will be attempted. When he’s found by a slender Okinawan , he can’t believe his luck. Not only does Eri speak some English but he’s also attracted to Jacob. Even as passion flares between them, what can the future hold for a black fighter pilot and an Okinawan seaweed farmer?

Now that I've done a little selfish promo for my book, here is the interesting part.  The contest! I'm going to give away a pdf copy of Ace's Desire for every ten entries I get.  Just answer this question to be entered to win.

What you're doing to celebrate Veteran's Day?

Just leave your answer in the comment section below with an email I can contact you at.

Me, I'm going up to my son's school and watching the Veteran's Day concert that his high school band and choir are putting on.  It's a real big to do, we'll have peeps from the local Honor Guard, other veterans, the entire school body, parents and loved ones.

P.S. Don't forget to stop by the rest of the peeps in this blog hop. They are listed below.
Posted by Dakota Trace at 9:49 AM

Email ThisBlogThis!Share to TwitterShare to FacebookShare to Pinterest
Labels: Ace's Desire, Contest, Men and Women of the Military Blog Hop