For this week's giveaway, I'm giving away a copy of my new release, Healer's Touch, Part One.  It's the second book in my Wizards of Venus trilogy. (And due to the fact that book was over 120K, it's been split into smaller books. The first  of which came out this Friday - and the second will be out July 6th)

Good luck everyone :)  Enjoy the blurb and excerpt I've included below...but don't forget to leave your name and email address in the comment section to be entered to win a free copy of the book.  I'll be drawing the winner Sunday morning after 12pm CST. 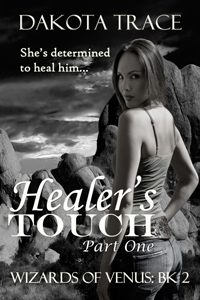 Katrina Littlebird, may seem human through and through, but the little healer from Earth isn't going to let that stop her from getting her man or in this case the man who's been haunting her dreams. King Charles deSathal is anything but willing. Still reeling from his deceased wife's betrayal, he wants nothing to do with women, let alone women of power. So what happens when she arrives in Venus set on doing that very thing? Why chaos of course.

Don't forget to comment below to be entered to win a free copy of Healer's Touch, Part One - winner will be announced on Sunday!
Posted by Dakota Trace at 1:28 PM