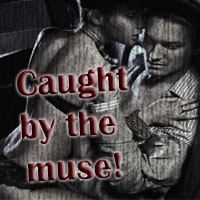 I have to say a quick thank you for those of who are joining me for my newest adventure, Caught by the Muse, hosted by Wicked Muse Society. The rules are simple. We post on excerpt of a current work in progress (something that hasn't been contracted and post it on our blog. And make sure to link it back to Wicked Muse Society.) So don't forget to stop back here to read the rest of contributors.


TO BE CONTINUED NEXT WEEK....

Want to read all of this week's FREE reads? Stop by Caught by the Muse


©Dakota Trace All rights reserved. This is a work of fiction. All names, characters, locations, and incidents are products of the author’s imagination, or have been used fictionally. Any resemblance to actual persons living or dead, locales, or events is entirely coincidental. No portion of this work may be transmitted or reproduced in any form, or by any means, without permission in writing from the author.
Posted by Dakota Trace at 12:00 AM