For this week's giveaway, I'm giving away a book off my back list in anticipation of the second book in this series on June 1st.  So this week Magic Touch will steal the spotlight in preparations for the release of  Healer's Touch.  Good luck everyone :)  Enjoy the blurb and excerpt I've include below...but don't forget to leave your name and email address in the comment section to be entered to win a free copy of the book.  I'll be drawing the winner Sunday morning after 9am CST. 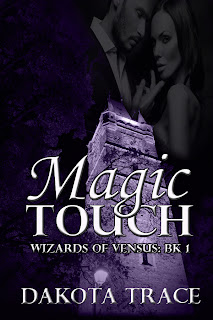 Welcome to the World of Venus. Unlike many had believed, it’s not inhabitable place, but one which simply has cloaked its people from outsider presence. In a world of magic and warriors, High Prince Randall deCarthwright and his two best friends, his cousin, Jonathan deCarthwright, and the daughter of his dad’s advisor, Grace Anne O’Connor, grew up.


​
Rand, the crown prince, soon to take over the reins from his retiring father; Gracie, who longs to follow her dad’s footsteps; and Jonathan, a powerful vindexicis warrior who has become the head of security for the royal family - all think they are on their set courses, until a prophesy shatters their belief.
​
Gracie was aware of the prophesy but with time and distance from her chosen mate, her belief in it is broken. She becomes livid when she finds out her father and the King of Venus have arranged her marriage to Rand. She’s shocked to find out Rand wants the marriage to take place. Against the advice of his sentient power, Ruzac, Rand’s given Gracie the time she’s needed to grow up before claiming her. Now, with the time at hand, the mezlcar, their intense mating ritual, begins to burn as an unseen force plots against them, and Rand is torn between mating with or protecting his chosen.
​
Join the wild ride as Rand attempts to convince Gracie of their right to be together, all while trying to defeat the bad guys with a bit of help from his friends - a spunky offworlder, and two unpredictable sentient beings.

Don't forget to comment below to be entered to win a free copy of Magic Touch - winner will be announced on Sunday!
Posted by Dakota Trace at 12:00 AM