Okay sorry about the delay in posting this. I had planned on having it up last night but alas live intruded and I didn't get it sent to my beta reader to proof for all those little pesky errors that I never seem to realize I've made until this morning. But Ms. Gloria is a doll and got it back to my ASAP.  So here it is, my flash for yesterday's picture.  I hope you enjoy it! ( If you're looking for the Easter Hop, it's the next post down :D)
Dakota 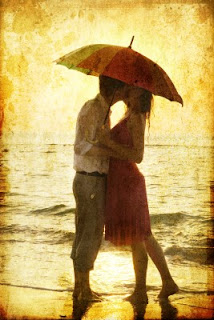 Sunrise Surprise: Sequel to The Wave
We  were walking along the beach – the same beach we’d met on. It was hard to believe it’d been nearly a year ago, that I’d met Aiden while visiting his family’s resort in Australia shortly after the death of my Grams.  In the year that passed, so much had changed. I no longer lived in the States. I’d stayed on at Aiden’s request after my holiday had ended.  With my job as a graphic designer, my profession was portable as long as I had a solid Internet connection.  My growing relationship with Aiden, while intense even passionate at times, had filled the hole my grams’s death had left behind.  In fact, I was certain I was in love with Aiden but hadn’t wanted to press the issue – since he’d never made any overtures of anything more permanent than us being lovers.
So what were we doing up this early dawn walking along the edge of the beach where we met?  Where a rogue wave had literally knocked me off my feet? I had no idea – other than Aiden’s sexy persistence in getting me out bed before dawn had been delicious.
Walking beside me at leisurely pace, the sun touching his already tanned skin, and his dark hair being teased by the wind, Aiden smiled down at me.  My body still pleasantly ached from our morning loving, but knew with a moment’s notice I would be ready again to take him.
“Happy, Allison?”  His voice sent familiar shivers down my spine.
I nodded. “Of course.”  I leaned closer to him, pressing the side of my face against his shoulder.
“Good.” There was a more than a bit of satisfaction in his tone
We walked a bit further in a comfortable silence before he stopped us turning me to face the rising sun and pulling me into his arms.  I wanted giggle a bit, since hooked over one arm he carried an umbrella due to the dark clouds on the horizon competing with the sun.  I’m sure we looked odd, but I didn’t care. I was just happy to take in the rising sun with him.
“Sometimes I wish I could stay like this forever.”  I snuggled back against him.
“Why can’t you?” He pressed his lips against my ear. “Marry me. Share this with me for the rest of our lives.”
My heart stopped, before it began to pound. Spinning in his arms, I didn’t even have to think about my answer.  My ‘yes’ was smothered against his lips as I stood up on tiptoe and pressed my mouth against his. He chuckled and proceeded to kiss me as the first raindrops fell.