For this week's Six, I'm going to start posting bits of my current WIP, Saving Micah, which will be released in January from Excessica Publishing.  As the sequel to Conquering Jude, this story takes up where Jude's left off as we follow Micah to New Orleans during Mardi Gras - unfortunately he's not faring all that well by himself. Enjoy this snippet from Saving Micah's prologue...and don't forget to check out all the fabulous Six Sentences from the rest of the gang. They can be found here!
Dakota

Micah wasn’t vain but knew his dark as night skin, clean shaven head, and swimmers build along with his piercing blue eyes intrigued women. But tonight I don’t want to be some woman’s trophy. Instead he wanted - no needed something to drown his sorrows. He was just hoping the music would do the trick. It’d been nearly three months since he’d held his Mistress, had driven his cock inside her tight depths while his best friend had buried his own in her tight ass.  Twelve long weeks since I’ve had an orgasm that wasn’t produced by my own hand - twelve weeks since I’ve felt the bite of a whip against my skin. 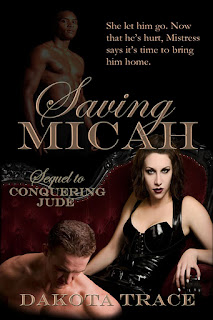 Saving Micah, the sequel to Conquering Jude
Coming January 2012!
Posted by Dakota Trace at 12:17 AM