So this week, I'm definitely gonna give you all a tidbit from my newest release, Obscene Ecstasy. This a mmf menage book, which means all three partners get it on with whoever they want - so that means that Oliver and Lowell are just as likely to end up in a lip lock with each as well as Kristy.  I love writing these types of books, because I feel that it's only fair that every one has fun - and as long as every one agrees - let the good times roll. Enjoy!

The need to claim Lowell pushed Oliver hard as he brushed his lips over the other mans. He wanted to growl in frustration as Lowell seemed to freeze under his mouth. Thrusting aggressively against the sealed seam of his lips, Oliver didn’t have the patience to ask or even coax the other man into opening for him. It was completely unlike him, but there was something about the asshat that had been trying to schmooze his man…

When the hell did he become mine…and why do I even care? We’re only supposed to be fuck buddies, partners in crime for the week we’re here. Remember that Stoddard – before you end up risking more than you should.

“Open, damnit. Give me that tongue.” He drew back enough to command even as he pushed Lowell up against the rough bark of the palm tree behind them – his inner dominant demanding that he take control 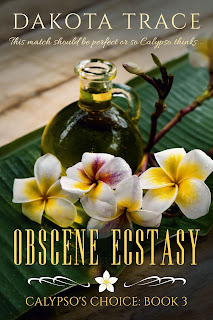 This match should be perfect or so Calypso thinks...

Screw what they say about revenge being served best cold. She was out to prove there would be a man out there who could keep up with her. When her ex-fiancée tells her that she was too much for him in the sack, Kristy Daniels is beyond pissed. So after giving her ring back, she heads for the newest, and kinkiest resort in the Caribbean. Surely at a place like Club Ecstasy Caicos, she will find a stud – or two to make her forgot.

Lowell McCormick has always possessed a high sex drive - to the point he’s lost lovers because of his constant state of arousal for both men and women. So after his last lover threw in the towel, he turned to Ms. Calypso’s erotic resorts. Surely there was someone out there who needed sex as much as him. Once he meets Oliver Stoddard, a fellow guest, and has one incredible night with him, he’s in a hedonist heaven. That’s until they set their sites on the newest arrival to the resort – a woman who pushes both of their cocks into overdrive, but isn’t quite the easy lay they expect.

Has Calypso misjudged this time? Or will Oliver and Lowell be able to overcome Kristy’s prickly exterior and win her battered heart?