Once again it's time for #MySexySaturday! In this week's edition, Lynn wants to us to find those snippets about our heroes and heroines keeping it sexy.  A tall order if you're writing a book about a new couple. But lucky for me Under His Domme's Control is about an established couple. One that has been married for several years - so enjoy Steven and his Domme, Hope.  And don't forget to stop by the rest of the peeps blogs.  They always have something yummy on tap.

Do you trust me, Steven?

With the memory of the first time she’d asked the question at the forefront, he swallowed hard and gazed up at the lit window. Just like on his wedding night, his apprehension ebbed away as Hope pushed back the curtain. Even not being able to clearly see her expression, his nerves settled. She just had that effect on him. Happy, sad, angry or even frustrated, that sexy moody bitch was his. His wife. His lover. His mistress. No matter her role after ten years, he loved her and knew she’d never truly hurt him. She would give him what he needed.

He blew out a ragged breath. It was time.

Time to face the music.

He rolled his shoulders, then exited the car and pocketed his keys. He took one last glance at the dark shadow against the window, watching as she moved away – more than likely to wait at the top of the stairs for him. His punishment awaited, and in it he would find his salvation. And if his cock enjoyed the hell out of it – all the better.

Opening the front door, he took a moment to kick off his shoes and toss his keys in the bowl on the credenza. He twisted the lock on the door, and set the alarm. He wasn’t stalling – just being neat like his mistress wanted – or so he told himself as he performed his nightly ritual of securing their home. Even though the crime rate was almost non-existent in their neighborhood, it satisified some primal part of him to protect his wife.

“I’m waiting.” The two words floated down the steps and sent a shiver up his spine. It was time. 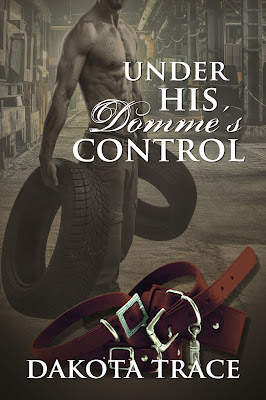 Blurb:
Steven has slipped up by lying to his wife, now it's up to his Mistress to bring him back on the straight and narrow.  But when he finds out the price for his deception will he still surrender?

Email ThisBlogThis!Share to TwitterShare to FacebookShare to Pinterest
Labels: #MySexySaturday, sexy, Under His Domme's Control