Okay it's once again time for Retro Monday, which means I'm switching gears and focusing on one of my older releases that doesn't get much attention anymore.  This time I've picked a sweet little revenge story called Always the Bridesmaid.  It's actually part of Eirelander's Revenge is Sweet series.  Of course we all know that revenge is always sweet as Jenna finds out.  I absolutely fell in love with both her and her hunky professor.  Being set in Iowa, this story has a special spot in my heart and deserves a second or even third look. 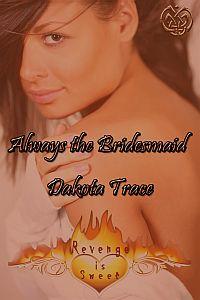 She’s been burned, and he’s going to help her get revenge.

“None of that, Jenna. You have a beautiful body.”
Her face heated, so she tried to hide behind sarcasm. “Yeah, right. Pull the other leg, it’s shorter.”
A startled squeak escaped her when his huge hands wrapped around her waist. He lifted her with ease onto the counter behind her. She batted at his hands when they reached for the hem of her dress. “What the hell are you doing?”
His blue eyes sparkled with determination and humor. “Checking to see which leg is shorter. I can’t very well pull the correct one if I don’t know.”
She stared at him in absolute shock when he slid the dress up as far as it would allow. When his roughened geologist’s hands traced over her exposed flesh, she caught her breath. It was hard to believe she was in the cloakroom at the Elmcrest Country Club letting a man she barely knew touch her so intimately during her cousin’s wedding reception.
“Hmm, I can’t tell.” He leaned over her before brushing his cheek across hers. His mouth landed near her ear and his tongue delved deep inside it. A barely there whimper passed her lips. Gooseflesh raced over her body and her pussy clenched when he pressed his hard thighs against the splayed vee of her legs. Even the brief press of his body against hers had her wishing things were different, that she was different. Oh God, what I wouldn’t give to have him fuck me right here. He’d make me forget Dawson ever existed.
“I will. I’ll help you forget him. All you have to do is say the word.” His voice was rough with desire. He extracted his tongue from her ear to run it down the side of her neck.
Horror flooded through her. Did I actually say that out loud? Her thoughts scattered when he jerked hard on her dress. She moaned when the stubborn material rose over her hips to pool at her waist, exposing her to not only the pressure of his solid body but also the cool blast of air-conditioned air. In response, she wrapped her legs around his lean hips. Dear Lord, the man is hung! She could barely believe it when she felt the solid outline of a cock. A rather large well-endowed cock if she wasn’t missing her guess.


She tried to rationalize the situation, but the flood of desire he’d sent boiling in her veins only made her cling to his broad shoulders. It was impossible to keep from rocking against him.

©Dakota Trace All rights reserved. This is a work of fiction. All names, characters, locations, and incidents are products of the author’s imagination, or have been used fictionally. Any resemblance to actual persons living or dead, locales, or events is entirely coincidental. No portion of this work may be transmitted or reproduced in any form, or by any means, without permission in writing from the author.
Posted by Dakota Trace at 6:00 AM