Okay, so I've been quiet the last couple of days. I assure you I didn't fall of the face of the earth. I've actually been writing *gasp*.   But with that said, I've made some progress and thought I might share with you, a sneak preview of some of the books, which will be coming out from me through out this year from my publisher Excessica.   So enjoy the sneak peak.  And tell me...how many books do you think are too many for a series?  We  will return to our regularly scheduled program tomorrow. 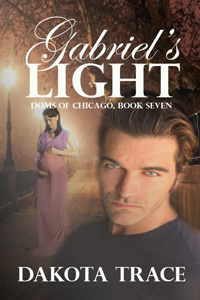 Gabriel Poulanos is only half the man he was since his beloved sub, Sara, died in a senseless mugging. Now he goes through life in a daze which worries not only his closest friends at Olivia’s but also its newest member, Zhenya. He resists every matchmaking attempt and schemes his friends come up with, until the early spring day when a surprise visit by a group of submissives leads to dragging him kicking and screaming out of his self-imposed exile.

Pregnant with her dead husband’s baby, Zhenya has experienced loss and it hurts her to see a man as vibrant as Gabriel wasting away. Then her new friends offer to throw her a baby shower, she agrees, but only if it is at Poulanos, Gabriel’s family restaurant. She never expects for her water to break nor the bad weather which keeps her confined, with not only a fainting submissive, but two over-bearing Doms and the grumpy restaurant owner. But that’s the least of her problems. Because once she gives birth to her daughter, her dead husband’s family demands she relinquish her.

At least until Gabriel finds out. If there’s one thing that this grieving Dom understands is a submissive’s right to choose her own path. 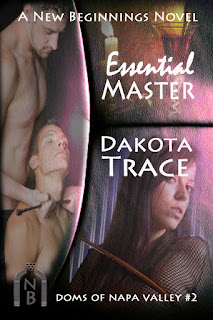 Submissive Zebadiah Pellegrino maybe down, but he's not out yet. He knows there is a Dom or Domme for him - it's just a matter of finding him or her.  But after an attack by a brutal Mistress, the owners of New Beginnings have been hovering like a pair of over protective hens. It's been over a year and he's ready to move on, but now he just has to convince them or a find a new club.
New members, Dom Nicholaus Tarquinio and switch Stephanie McKeown have a unique D/s relationship and have been searching for some time for a third member, a submissive, to complete their triad. But the trick is to find a man who not only appeals to Nicholaus's domination, but who isn't above allowing Stephanie to have her fun too.
When Zebadiah catches Stephanie's eye after a heated confrontation with one of the owners, she and Nicholaus approach the wounded sub, wondering if he's truly ready to take what they have to offer him, or is Ethan right about Zebahiah not being ready? Only time will tell. 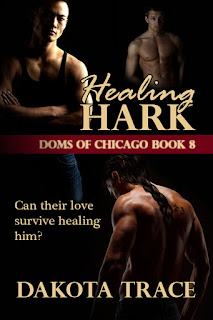 Healing Hark – (Coming in August 2013)
Book 8 in Doms of Chicago
Despite being in a long-term relationship with his Master and lover, Diachi Rai, CEO Bryan Sterling is feeling restless, and it all has to do with his Master’s new friend, Harkalone “Hark” Akula.  Ever since the Native American switch entered his and Master Rai’s home, Bryan’s been distracted and out of sorts. But it’s not just because he finds the man attractive, or that his Master was paying Bryan any less attention with their guest there. It’s his unreasonable fear that Hark is here for more than just a place to stay.  No, he just can’t get over the feeling that Hark has an ulterior motive: to make a play for Bryan’s Master. When the fear becomes reality, Bryan panics.
Diachi is a man of many secrets, and Hark happens to be one of his darkest. As his first submissive, Hark was partially responsible for molding Diachi into the Dom he’s become. But when he found himself unable to give Hark what he needed, Diachi had uncollared him, letting the man he loved go, rather than share him. Now Hark is back, scarred and darker than Diachi could ever remember him being. While in love with Bryan, Diachi still can’t find the strength to turn Hark away. But it sets in motion a series of events which he is unprepared for, when Hark requests becoming the third member in his and Bryan’s relationship. 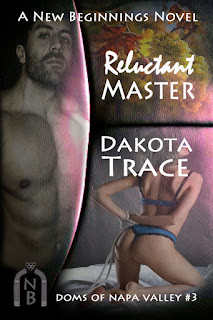 Hurricane Lauren has struck once again, but this time her victim isn’t going to let her off so easy.
Carefree and adventurous, Lauren Haskell loves her life. Not only does she have a great job as a gearhead, but she’s also content to go from Dom to Dom, playing but never risking her heart, until it’s gotten her nicknamed Hurricane Lauren. Not that it has stopped Doms from trying to tame her – especially Davis Clayton, half owner of New Beginnings. In desperation to keep him from getting too close, she agrees to scene with another Dom. While she’s had fun with the man, it’s time to move on. Too bad the Dom in question doesn’t think so and is willing to break the rules to keep her.
Davis Clayton has hungered for Lauren to the point of desperation.  When he sees Lauren with her latest victim, he’s had enough of chasing the little blonde submissive. He’s done playing the fool over her.  But keeping his distance is proving a test for even as one of the strongest of Masters, until Lauren comes to him for protection from her stalker. When she asks him to pose as her Dom to keep the other man at bay, he agrees but on his terms. He may be one of the most Reluctant Masters in New Beginnings, but he will have her submission in exchange.

©Dakota Trace All rights reserved. This is a work of fiction. All names, characters, locations, and incidents are products of the author’s imagination, or have been used fictionally. Any resemblance to actual persons living or dead, locales, or events is entirely coincidental. No portion of this work may be transmitted or reproduced in any form, or by any means, without permission in writing from the author.
Posted by Dakota Trace at 11:17 PM