Saturday Giveaways #2: With This Heart

Saturday Giveaways: With This Heart

For this week's giveaway, I've gone back to my roots as a writer and have penned a sweetly romantic erotic tale with my newest release, With This Heart.  It came out yesterday from Excessica Publishing and features, Paisley,  a young but gifted college student and her lover, a black man by the name of Kaleb, as they focus on what happens when they are blessed with an unexpected pregnancy. Enjoy the blurb and excerpt I've include below...but don't forget to leave your name and email address in the comment section to be entered to win a free copy of the book.  I'll be drawing the winner Sunday morning after 9am CST. 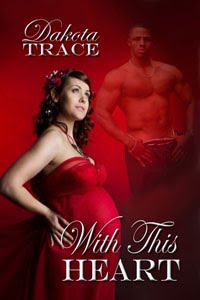 A gifted student, Paisley Dawson, is close to having her doctorate and becoming one of the youngest graduates her university has ever seen. Then the worse happens or best depending on your point of view. She's falls for her new intern professor, Kaleb Bryant - a black man who while extremely intelligent also still owes his country several years of service. As she falls deeper under Kaleb's spell, he's called back up for a six month tour in the Middle East, leaving Paisley alone - defenseless against his family and over six months pregnant by the time he returns. Things come to a head when a well-meaning relative confronts Paisley at school, spreading lies about Kaleb. Will Kaleb be able to over come the damage his family's prejudices against whites has done or will he lose Paisley and  their unborn child because of them?


“Do you remember that night, Kaleb?” She kept her face pressed against his shirt. His cologne was a welcome memory. Listening to his heart skip a beat, she wasn’t sure what to expect from him...

Lying on the couch with his body wedged between her legs, Paisley rubbed her hands over the closely cropped hair resting against her chest. He’d had it longer while teaching, but with his return to active duty the Army had cut it. She giggled at the feel of it between her fingers and against her palms.

“What’s so funny, Ms. Dawson?” Just lifting his head enough to catch her gaze, the rest of his body remained still. Not that she minded. Since they’d begun dating six weeks ago, many a night they’d ended curled up on her couch watching something mindless on the TV.

“Your hair. It tickles. Before you, I’ve never touched a black man’s hair …” she froze at the implication of her words. “…ah, I mean I’ve never touched any man’s hair…” she felt the familiar flush of heat in her cheeks. Once again she’d managed to put her foot in her mouth. One of these days she’d learn to think before she spoke, but it hadn’t happened yet.

He smiled up at her. “I know what you meant, baby. It feels different when it’s this short.” He laid his head back down. “Damn, you always smell so good. I think it’s one of the things I’m going to miss most while I’m over there.” Nuzzling her chest, he drew in a deep breath before his eyes drifted shut. “And moments like this.” He shifted a bit and against her leg, she felt the hardness of him.

She continued to rub his back as she stared mindlessly at the television screen, remembering the first time she’d felt him against her. She’d been leery but after being held in his arms numerous times with nothing happening, she accepted it for what it was worth: his body’s expression of his attraction. He’d once told her just because his dick had gotten hard didn’t mean he had to do anything with it. But now with him leaving, she wanted him to do something other than just hold her. She wanted to experience what it felt like to become a woman in his arms.

Running her fingers through his short hair, she gathered up her courage. “Do you remember what you asked me earlier?”
“Hmmm…?” He squeezed her gently, his eyes still closed. He sounded as if he were almost asleep.

Licking her lips, she stroked a finger over his cheek. “I want you to…” She fumbled with the words, cursing her utter shyness. She cleared her throat before trying again. “I mean you’re leaving and I won’t see you for six months. That’s too long for me.”

“It’ll go fast, baby. I told you, I’ll still be able to talk to you.” He pressed closer, his tone reassuring. “We can make it work.”

“I know we will. It’s just…” Finally she just blurted it out. “Please, I want to know what it feels like. Will you make love to me, Kaleb?”

When she thought back later about it, his reaction was comical. His dark eyes flew open as he scrambled to his hands and knees, and her always suave and debonair boyfriend fell off the couch to land between it and the scarred second-hand coffee table she’d bought at the local thrift shop.

“Are you okay?” She swung her legs over the edge of couch.

Looking up at her from his position flat on his back, his chest heaved. “Please tell me you’re not playing around.” He scrubbed his hands over his face. “You can’t be teasing me about this now. You said you wanted to wait…I promised we’d wait ‘til you felt more comfortable – not because you’re worried about my leaving.”

She could see the fine tremor in his fingers as he pressed one hand over his groin before tossing his other arm over his eyes.

Watching him, she sighed. She loved the fact even now, he was trying to put her first. Evidently she was going to have to take matters into her own hands. Reaching for the hem of her t-shirt, she yanked it over her head, dropping the soft cotton on the couch next to her. “Kaleb?”

“Yeah.” He still wasn’t looking at her - and that simply wouldn’t do.

“Would you consider me a reasonable woman who knows what she wants?” She shimmied out of her leggings before wadding them up in her hands.

There wasn’t even a pause before he answered. “Of course.”

“Look at me.” His arm lifted cautiously off his face.

She loved his reaction – his beautiful dark eyes widened as he shot up into a sitting position. “Damn, baby…” He reached for the blanket next to her. She sighed, knowing what her honorable man was trying to do.

Slipping past his outstretched arms, she stood at the foot of the couch. Tossing the wadded up leggings at him, she ignored the fact she was wearing nothing more than a tiny pair of bikini panties and gave him an extreme ultimatum. “You have one of two choices here. You can either let yourself out and I’ll do what I’ve done every night for the past two weeks – I’ll take care of myself, OR you can join me in my bedroom.” She licked her lower lip. “I may be inexperienced, Kaleb, but I know my own mind and I want to make love with you. Something I can remember and hold dear while you’re gone…”

“Of course I remember it.” His voice drew her out of her woolgathering as his hand rubbed up and down her back. “If I live to be a hundred and fifty I don’t think I’d be able to forget how you stood there and took me to task for doubting you. The way you gave yourself to me…” The sound of a brisk knock on the door halted his words before the rattle of the door handle.
“Ms. Dawson, is everything okay in there?” The doctor’s voice was muffled.

Don't forget to comment below to be entered to win a free copy of With This Heart - winner will be announced on Sunday!
Posted by Dakota Trace at 12:00 AM

Email ThisBlogThis!Share to TwitterShare to FacebookShare to Pinterest
Labels: Giveaway, Saturday Giveaway, With This Heart