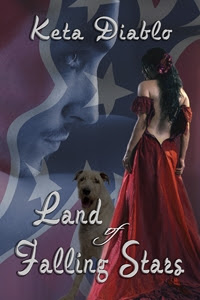 About Land of Falling Stars, an erotic romance/historical:
After her parents die in a fire, Sophia Whitfield struggles to save her beloved home, Arbor Rose. The Civil War has devastated the South, and another blue coat has come to steal her meager possessions. Before the hated enemy inflicts his destruction, she shoots him. And soon discovers the soldier is Gavin, the champion of her childhood.
Gavin's dark secret lurks in Sophia’s future. When she discovers the truth, she's torn between a burning hunger for the man she truly loves and loyalty to Jesse, their childhood friend. The despicable acts of war have changed everything Sophia and Gavin once cherished. Yet somewhere deep in their hearts, the mystical Land of Falling Stars still exists.
* An expanded version of the original best-selling Civil War novel
On Kindle $2.99: http://amzn.to/qsrw5D
On Nook $2.99:  http://bit.ly/nyDzns
Brought to you by Books We Love Spice! Read “Why I Wrote Land of Falling Stars” http://bwlppspice. Blogspot. Com/
~ ~ ~
Snippets of reviews:
“You haven’t lived until you’ve read Keta Diablo’s Land of Falling Stars.” Crave More Romance, 5 Stars
“LOFS Makes for one phenomenal read that will keep your heart pumping and the pages turning, not just from the delightfully sinful sex, oh no, the drama and suspense will carry
you through till the end!” Book Junkie, 5 Stars
“Diablo pens a beautiful, haunting love story full of passion, deception, danger and the epic War between the states that will leave you breathless.” Night Owl Romance, 4.75 Stars