Thanks for stopping by today for my part of Red Lipstick Journals Summer Sizzlers blog hop.  As my contribution to this amazing hop, I've penned a nice sizzling little forced seduction scene....so reader beware this story contains a naughty sub and a Dom whose determined to give her the ultimate fantasy. 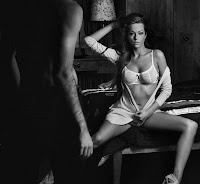 
If you liked part one of Sultry Danger, be sure to check out the other stories in the Summer Sizzler anthology.
Dena's Servant of the Sun
Brindle's The Goddess Next Door
Jacqueline's Afternoon at Pretty Pool

Also don't forget for the month of August if you become a follower or currently are, you can get a free copy of the entire anthology! That's right all seven sizzling hot summer shorts for just being a follower!
©Dakota Trace All rights reserved. This is a work of fiction. All names, characters, locations, and incidents are products of the author’s imagination, or have been used fictionally. Any resemblance to actual persons living or dead, locales, or events is entirely coincidental. No portion of this work may be transmitted or reproduced in any form, or by any means, without permission in writing from the author.
Posted by Dakota Trace at 2:01 AM