Hey there peeps, I'm blessed today to have the wonderful Verity Ant stopping by my blog to talk about her new book from No Boundaries Press.  And let me tell you it sure is a great book. (Lucky Dakota got a chance to read an advanced copy and lets just say I wasn't able to put it down until I finished it.)  You'll have to tell me, Verity, where you came up with Kevin's character...surely he isn't all fictional.  With that being said, I'm going to turn this over to Verity and remind you to check out the review of this awesome book which I posted earlier (which includes the links to where to purchase this wonderfully amazing book.)

First, before I tell you about Kevin, I'd like to say thank you for having me here today. My books are edgy and unconventional, so any blogger who takes them on has courage that I applaud.

Kevin—the hero from my book, Master's Hunt--is a real person. I embellished him a little, making him a very rich guy (instead of just a little rich) and a bit younger than the real Kevin, but basically, he's the same guy. Those of you who follow my blog (Painful Ecstasy) might recognize him; his name is Derek. Names have been changed to protect the innocent – or not so innocent, as the case may be.

For the sake of consistency, we'll keep calling him Kevin. Kevin is a sexual sadist. Now that might make a few of you quail. Be calm, Grasshopper. Sexual sadism isn't a disease or a mental condition. It's a sexual preference, like any other. Maybe it's not a kink you're into, or maybe it is. It's a kink Kevin likes. He's also quite dominant, but not a control freak, though he likes things a certain way. He's flexible most of the time, however, so long as one does the tasks one is responsible for. Very reasonable, no?

Kevin, in real life as well as the book, knows what he wants from life. I like that personality trait in all the heroes I write and those I read about as well. I'm not into wishy-washy and I don't write heroes who are.

I've shared with you the fact that I made Kevin super-rich. Why do that? Well, first of all, let me reveal that it was not to make him comparable to Christian Grey in Fifty Shades. Kevin existed long before Christian, because I started writing Kevin's stories in about 1994. I have a whole lot of short stories about him and am only beginning to expand them into books.  They were too personal to me before. So why a rich guy? Because it gives Kevin access to powerful people, situations and resources that normal folks don't have. Master's Hunt, like most novels, is about fantasy situations, things we regular Joes and Janes can't ever experience. The vast majority of us haven't been super-rich, so can only imagine what that would be like and envy it a little. I take that imagination and give it wings. If you're gonna dream, dream big.

Kevin is also slightly younger in the book, Master's Hunt, than the real Kevin is. He's no spring chicken, though. Kevin is about forty. I picked that age because it gives him maturity, life experience, and makes him more realistic. The real Kevin has all those things too, so I can write about those traits with confidence that I'm getting it right.

Let's talk about sex appeal for a moment. Kevin has sex appeal. So does the real guy. Now, I'll grant you that what's very sexy for one person isn't necessarily very sexy for another, but Kevin seems to be a guy women can love, even if his sadistic side is a little scary. Maybe that's what makes him more appealing—that bad boy thing.

There are other male characters in Master's Hunt, of course. One is Ross Adler, private investigator and former special ops guy. He seems to be popular among readers too, though he's a bit skanky--skanky in a good way. Both Kevin and Ross will be in my next Master of Two book, tentatively titled Master of Inspiration.  I'd like to get that out to readers before the end of the year. In the meantime, try out Master's Hunt (a Master of Two novel) and Breaking Toys or Pucker (my books under the name of D.V. Ant). I've created heroes and anti-heroes that make you shiver with pleasure. And isn't that what erotica is all about?

Indeed, I will have to agree with you there,Verity. Erotica should be all about pleasure and it's various forms.  Thank you sooo much for answering my question and taking the time out of your busy schedule to stop by.  I've included your giveaway deets below and remind peeps to enter...just leave your name and email address in the comment area.  If you have time check out Verity's awesome trailer for the book!  :D 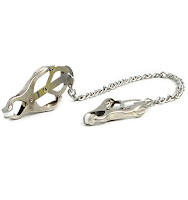 (1) One GRAND PRIZE giveaway to one commenter. GRAND PRIZE is a $25 Gift Certificate to the Pleasure Chest online. (A haunt of mine in Los Angeles, and an excellent place to get toys of all sorts.)  http://www.thepleasurechest.com/ I checked the prices of things and found that $25 will buy you the exact same type of nipple clamps (clover/butterfly type) used in the novel.   (I would not offer the clamps directly, of course. The winner can choose whatever she likes.)

All giveaways allow for multiple entries. (Commenting on one blog gets you one entry, two blogs two entries, etc.)
Posted by Dakota Trace at 1:00 AM